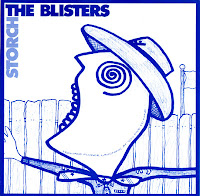 Another great, albeit posthumous find.  Gotta love the dollar bins folks.  My initial assumption was that Storch was a debut release, but through the miracle of Facebook, I have since learned that New Jersey-ites The Blisters, had an array of other releases under their belt, some dating back to 1987.  In fact, this three song jewel was to be the group's last recorded foray, which is sort of tragic given the tunes are so utterly, um...blistering.  "Teenage Flower" is par excellence bar-rock-cum-punk gold, and the two flips by and large follow suit.  The Blisters adhere to the same beer-battered recipe as The Figgs, Magnolias, Junk Monkeys (them again?) and The Leonards, but at the end of the day all roads lead to Minneapolis, or more specifically Paul Westerberg and Co.  I hope I have the chance to hear more of where this came from.  A tell-all bio can be read here at your leisure.

Used to have a well-played copy of a tape I made of the Blisters playing live on WFMU. Great set, especially a cover of the Replacement's God Damn Job. Had their first 2 singles also before leaving Jersey. I forget which band member ran the record store, but I talked to him a couple of times about punk rock.

Thanks for your input folks. Good news. I found a 1991 Blisters album called Off My Back over at iskSP blog. Have at it:

There is a Blisters live set on Pat Duncan's archives at WFMU. I assume it is the same one I taped back in '87, but the show is RAM and I don't have time at the moment to listen to the whole show right now...

One of the guys from The Blisters used to work at a record store in Union, NJ. They used to play regularly in NJ and were heard often on WRSU (Rutgers) and WFMU.

I have the "Fast Food"/"Good Thing Going & Too Many Years" 7" from 1987 and 1989's "Oozing into Deutschland" single. Unfortunately, my computer and turntable are far apart at this moment, or I'd digitize them.