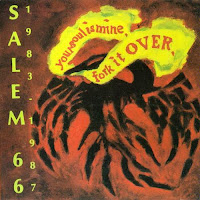 It was the early '90s when I happened upon Salem 66's Frequency and Urgency album in a dollar cassette rack at Camelot Records.  Impressed by their Homestead Records pedigree (and an endearing album title) I thought, how could I go wrong?  After all, they shared the same hallowed imprint as Naked Raygun, Big Black and Squirrel Bait.  Well, when tape met tape deck, I was unmoved, due in large part to my general indifference at the time with female singers, of which Salem boasted two, Judy Grunwald and Beth Kaplan.

Fast forward roughly twenty years to 2011, which is when I had the opportunity to reevaluate Salem 66 at a price I couldn't refuse - free.  Your Soul is Mine, Fork It Over is a summation of the band's first four years of operation, and it proved to be a more impressive introduction than my random tape grab of Frequency..., when at that time what I was really hankering for was the next Dinosaur Jr. or Nirvana.  For whatever the reason it took a good two decades of left-of-the-dial schooling for me to truly appreciate Grunwald and Kaplan's sweet, clangy fretboard runs and lovingly awkward vocal interplay.  Blending the Feelies subtle reverb with a more modest variation on REM's early aesthetic, Salem 66 weren't innovators, but luckily the worst I can say about these Massachusetts denizens was that their schtick tended to be too unidimensional for their own good.  Culling together eighteen songs from their first ep, a single ("Across the Sea") and a generous swath of A Ripping Spin and the aforementioned Frequency LPs, the long out of print Your Soul is Mine... is your only ticket for hearing these tracks in a digital, surface noise-free realm.  The brunt of this hardly knocks me dead, but Salem 66 deserved far more than the cursory listen I accorded them before I wised up.

I am a big fan of what Homestead did. The sense I had of Salem 66 was that they were a big part of their local scene. I think a bandmember or relative of one of the bandmembers ran a booking agency near Boston. They did have a few really good songs.

First, thanks for posting this. The more attention you can give to a band that for some could become one of their all-time favorites the better.

Salem 66 DID indeed get a lot of press in the Boston area, often focused on their being an "all-girl" band (later they added at a female singer).

At the time their intense image put me off a little and my guess is that if I had heard them back then, I probably would not have cared much for it ("too weird").

Fast forward to about five years when clued in by a book -- pretty sure it was "Lost In The Grooves" -- I searched the Internet and found the "Across The Sea" 45 somewhere (maybe the Little Hits blog).

I was stunned. There was something relentless and disturbing and seemingly deep about this song that kept me listening to it over and over. A year or so later some real tragedy landed on my family, and I adapted the song to fit that situation (key lyric the singer's unconvincing proclamation that "I'm not afraid of living on my own now."

Here in the Boston area I have been able to pick up a few of their LP's on vinyl. Nothing as great as that for me, but all of it interesting. I never could find this out of print compilation.

Is it true that the two singers have never released another recording since the end of Salem 66?

Check it out folks, this could be your new favorite cult band.

I concur, and certainly relate with the notion of adapting songs as changes in life arise. Unfortuntately changes and variations in my life usually take a turn for the worse - all the better to have good music to fall back on. Salem 66 had a certain mystique to them. I really don't know what anyone in the band went onto afterwards.

any chance of a re-up? my brain just remembered how much I loved that 1st ep. Thanks!

I am the first Male guitar player to break the All-Female ranks of Salem 66.In interviews we were always asked "whats it like to be in an all girl band?" To which i'd answer "I'm a guy.Do I need to pull down my pants to prove it?" Eventually I stopped doing interviews because of that foolish question.I'm the only member of the band who continued and continues to play music.

The link has been updated (again).

Really like the tune I found ('Lemon Rind') and can't wait to hear more. [I'm partial to female vocals]. Thanks for the introduction/discovery.

First heard this band on an overnight CBC Radio program called 'Brave New Waves' back in the late 80s. Tremendous share... Thank you.

It's odd that "Lucky Penny" is missing from this retrospective, since it's probably the only track of theirs that got significant non-local airplay. The video for it made the rounds on MTV's "120 Minutes", so it's probably the one release that put them on the radars of most people who've ever heard of them and aren't from Massachusetts.

Please re-up! Saw them live a few times way back when - brings back fond memories!

This is a welcome thread. "Frequency and Urgency" was the first "college radio" record I ever bought after hearing one of their songs on WTJU. (My then-girlfriend was giving me crap about not listening to boring hard-rock groups -- "Mott the Hoople" comes to mind.) AAR, I loved this record, possibly because it was stylistically different from anything I'd ever heard. ... And I've been collecting girl bands ever since.