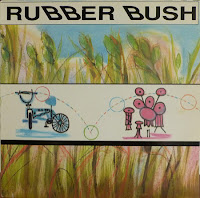 I'm a sucker for sleeve art, and this disk promised to be a treat as soon as I laid eyes on it.  Upon closer inspection, the back cover revealed the Rubber Bush roster, comprised of what would appear to be assumed monikers like Raine Davies, Buzzsaw Collins and Puggy Divan, the latter two of whom are the purported frontman.  As I made my way to the turntable, the inner label caught my eye, particularly the name Tom Marolda who is credited as the author of these songs.  Could this be the Tom Marolda of The Toms fame? Probably way too much of a coincidence not to be methinks, but web-wise, I was unable to confirm this.  For the unacquainted, Marolda was The Toms, who released a handful of privately pressed albums in the late '70s and beyond, his most lauded accomplishment being the Tom's self-titled debut, circa 1979, which was reissued twice by Not Lame Records (RIP).  Thing is, the mouthpiece for Rubber Bush, doesn't sound a thing like Mr. Marolda, and therein lies the mystery.  Whomever is gracing the mic does however exude the timbre of Waterboys/World Party's Karl Wallinger, with a faint Dylan-esque drawl tossed in for good measure (trust me, hearing is believing).

One thing I can say about Rubber Bush is they don't take themselves too seriously.  They bear a flippant stripe a la Talking Heads, coupled with the perturbed, romantically frustrated ethos of Donnie Iris, Tuff Darts, The A's, and to a lesser extent The Tubes.  Sonically, they're coming from the same place as that bunch and the arrangements on this platter are smart, and dare I say even sophisticated, though RB's teasing melodies aren't consistently brought to the fore.  Rubber Bush falls a few notches short of a classic, but hardy deserves it's utterly obscure fate.  If anyone can enlighten me on this record, or Rubber Bush in general, comment away.  BTW, sorry for the aggravating pops and snaps on "The Expert."  Should I come across a cleaner copy thy shall be re-ripped.

Hi.
Thank you so much for such article that is full of interesting ................... Engine Mounting Exporters.
http://www.enginemountbushings.com

Hi, Thanks for sharing information regarding rubber bush. It's very informatics and useful article. I really appreciate for that.

Yes, thank you! I got a promo copy of this album when i came out and played the crap out of it on WFIT (Melbourne, FL) that year. Punching The Pilot was actually a minor hit on the station. I LOVED and still love the record. Still have my red vinyl copy. Nonetheless, this is the only mention of them on the internet as far as I can tell. This record deserved a way better fate.