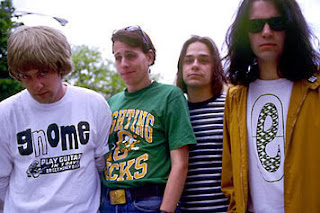 We've come to the end of the road folks.  I mentioned from the get go that since the recordings from the Posies Broadcasts series were derived from radio sessions and concerts circa the Frosting on the Beater and Amazing Disgrace albums that things were bound to get redundant.  Although I was true to my word, these songs boast an inherent beauty, power, and charm that have stood the test of time (that is if you count fifteen years or so as much of a test).  Vol. 7 is one of the better of these rather voluptuous compendiums, culled from two performances, the first being from an ace acoustic session with Jon and Ken at 99X FM studio in Atlanta.  In addition to playing the "standards" from the aforementioned platters, the boys reach all the way back to their '80s roots and play "Like Me Too" from Failure, not to mention my favorite Dear 23 number, "Everyone Moves Away."

The second half of Vol. 7 is comprised of the band's 1996 Reading Festival gig, which is quite likely the biggest audience they've played to before or since.  A faithful rendering of Cheap Trick's "Surrender" seals the deal .  A very big and special thanks to K.M. (you know who you are) for painstakingly assembling each and every volume of the Broadcasts series.  I've merely been offering these to world at large in a neat and tidy compressed audio format.

Wasn't aware of this. All of a sudden? Will look into this later today.

i love the gnome shirt!

The Gnome shirt is balls out indeed. Very good taste.

Is it possible you can re-up all of these Posies "Broadcasts" volumes? I had them all until my harddrive blew up and now Im trying to replace them. My favorite band of all time, and its not even close.