I've had For Squirrels on the brain ever since namedropping them in my Naomi's Hair entry a few days ago.  Before they pondered the significance of Kurt Cobain in "Mighty K.C." (from their 1995 Example album), and more notably before the tragic van accident from the same year that claimed the lives of singer Jack Vigliatura, bassist Bill White, and tour manager Tim Bender, the Gainesville, FL quartet issued a self released CD in 1993, Baypath Rd.  Limited to one thousand copies (or so I've heard) Baypath Rd. became an almost instant collectors item as word of For Squirrels misfortune got out, and in years to come would routinely fetch over $100 or so on Ebay.  I don't have an original copy, or even a cd-r of an original, but MP3s weren't hard to come by, and in fact are available from the For Squirrels fanpage linked above. The Squirrels aforementioned sophomore disk, Example, sounded like a perfect fusion of Nirvana-esque tantrums amidst the esoteric folk/pop tenor of Fables/Pageant-era REM.  On the other hand, the preceding Baypath Rd plays out almost as if Nevermind failed to see the light of day altogether.  The REM influence on Baypath is unmistakably pervasive, and for that matter signals where Michael Stipe & Co. would have gone were it not for all the "innovations" they dabbled in during the '90s.  Vigliatura bears a cathartic, yearning timbre that would be deemed "emo" in todays marketplace, but Michael Tooke's ringing chords countered the Squirrel's angst factor in ways their contemporaries didn't contemplate attempting,  "Go On Up" and "Flagboy" were terse, driving rockers, while on the opposite side of the coin, Baypath offered more than it's fair share of reflective ballads in the form of "Kill the Birds" and "Left Behind," among a few others.  To this set of ears the album's crescendo is struck on "Nathaniel's Song" a brisk, strummy pop jewel buttressed on a backbone of sublime multi-tracked harmonies.  A highly endearing set of songs 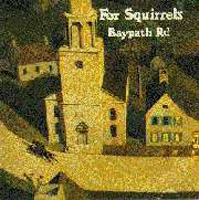 As mentioned, copies of Baypath Rd are long gone, but one particularly enthusiastic For Squirrels supporter with some studio know-how took it upon himself in 2008 to "remaster" the whole enchalada, giving it a louder mix and boasting the album's sonic attributes in general.  The original Rapidshare link where I obtained this from has expired, so I created my own and have provided it below, but do yourself a favor and view this Live Journal page for more details.  As an additional download, I'm also sharing six demos the band tracked in 1993, including a handful of songs that didn't make the cut for Baypath.  There's also a bevy of F/S live shows, more demos, and evan a radio appearance up for grabs over at Forsquirrels.net.

I already have this, but I am excited it will get long overdue exposure now. Does anyone here have their B-side "Van Gogh"?

So, I click on the link and see everyone and his uncle is asking about "Van Gogh." Sorry for the redundancy.

Example was an amazing album, so it's nice to know that others felt the same way. I never knew that Baypath was so limited. I picked up a copy about 10 years ago, on an obscure trader's [now defunct]site along with a promo for Belly's "Red" single, and played it a few times. Yeah, R.E.M. is a definite influence, but thanks for reminding me to go play it some more. Limited to 1,000, really? As a hint dropped, do you know of any live Belly bootlegs around? And I think Tripmaster monkey and Summercamp would be awesome future posts. Just saying............

Actually I heard of the 1000 pressing of Baypath Rd straight from the band themselves in a radio interview. I'm not really sure if I have much more in the way of Summercamp to share, and nothing by Tripmaster Monkey. As for Belly boots I'll keep my eyes peeled.

Your description was interesting so gonna give them a go, Thanks!

Could anyone upload the CD "Example"?

please upload the albums again!!!! I implore you! this wonderful music is hard to find today, so please, help me!

I learned of For Squirrels while a student at UF from '97 - '99 and was particularly moved by their story. Then a year or two later, I discovered that I was a classmate of Jack (drummer) in grad school.... I was a big fan of Example, but somewhat embarrassingly, I just heard Bay Path Rd. for the first time today and am floored by the sound. I think I like this album more than Example.

I would love to get a copy of the remastered versions you had posted previously.

For those of you that can't find either Baypath Road or Example, you can get them here: http://www.forsquirrels.net/downloads/

The links have just been updated.

and can you upload Example ?

Holy Cow! Ive been looking for Baypath Rd forever, but the link is dead!
Can you re-up this?
My God it would be like Christmas!
What an awesome band they were.
They would have been huge.

How much does a copy of your CD cost? I pay you for PAYPAL reply to my email elcracky@gmail.com please

can you re up the zip files please?

I grew up with Jack vigulatura on bay path rd in Spencer MA. Miss ya buddy!

Just FYI For Squirrels "The Immortal Dog & Pony Show" official teaser out in OCT 2020 Keep an eye out on YouTube / FB.. forsquirrelsproject@gmail.com