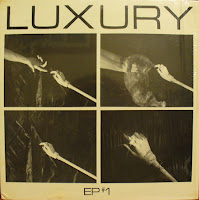 This thirty year relic didn't come particularly cheap, but then again what would you expect for a long out of print record from a band that earned a coveted spot on the 2004 Yellow Pills: Prefill compilation?  The early '80 was an especially fertile period for power pop and Luxury, who operated out of the the relatively far flung environs of Iowa, weren't immune to the bug that had thankfully infiltrated so many music palettes of that era.  This quintet's spin on things wasn't quite as linear and showroom clean as say, the Rubinoos and Shoes.  Kerry Swan's wonky keyboard lines, and Luxury's overall embrace of speedy tempos slotted them that much further left of center than their more generously compensated contemporaries.  EP #1, (which as fate would have it proved to be their only extended playing disk) falls a notch or two shy of being a wall-to-wall goldmine, but it's most striking moments like "Bible School" and "Eyes of Love" make a case for Luxury being ahead of the curve of their crowded field of competitors.  The band's discography is rounded out by two preceding singles, one of which is archived here.

Cheers for tracking this down, purchasing it and uploading it. I've been seeking this release out for a while and just found your post. Particularly enjoying "She Really Didn't Mean That" with its jaunty and interesting rhythm backing.

I just found a copy at the half price books here in des moines iowa and in doing some research i wound up here. Really great record. If you don't mind me asking you, how much did you have to pay for your copy?

Would you please re-up?

Can you update the link please? :)

Hey there, awesome blogger. Just came across another post (no surprise there) that would make me shake and shiver with glee were the link updated. Cheers from San Francisco!!

Bro, can you update the link please?

Yeah, the link was updated, thanks bro...

To anybody, can you all tell me any song like 'tube ballet by luxury' and 'old hat by uncle dog'? But, from 70' and 80's band? (Sorry about my english)