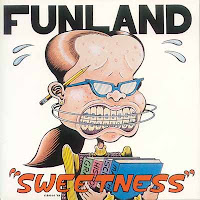 Funland were one of several Dallas, TX combos (along with the Toadies, Hagfish, etc) to be plucked from the Deep Ellum circuit in the wake of Nirvana's meteoric rise to the top of the alt-rock food chain.  Unlike most of their scene cohorts, they didn't boast much of an indie pedigree, and in fact, I believe Sweetness was their first proper release.  More power pop than grunge, Funland's linear yet satisfying modus operandi went hand in hand with one of their contemporaries, Best Kissers in the World (who have been on a reissue spree of late, but I digress).  From what I recall, "City of Wet Angels" and "Fall Away" both received moderate airplay, but the ep failed to catch fire and Arista passed on releasing a full length by the quartet.  Kind of a shock, since all the ingredients seemed to fall perfectly into place here.  The concluding "Obligatory Cover (For the Kids)" is a medley of Air Supply's "Making Love Out of Nothing at All" and "Lost in Love," which as far as I'm concerned didn't do "the kids" much of a favor, at least not the one typing this.  Funland at least had the good sense to commission Hate! comic book scribe, Peter Bagge to illustrate the striking album sleeve.

In 1995 the independently issued The Funland Band, album hit the pavement, but it's abrasive bent rivaled that of an Archers of Loaf record, and as such, was a pretty far cry from Sweetness.

Fun facts: the drummer was Will Johnson, who would, at the same time, release tapes and seven inches under the name "Centro-matic." I wonder whatever happened to those guys? :)

Additionally, lead singer Peter Schmidt has released a handful of really great records, as well as being a part of bands the Legendary Crystal Chandeliers and post-Bedhead band The New Year. He still makes music; there have been hints over the years of a Funland reunion, but nothing has ever come of it.

Here's a fun version he did of Magnetic Fields' "All The Umbrellas in London" that was a minor "hit" a few years ago on Dallas radio.

Great, a didnt knowing.... Thanks

Holy cow, I never realized Will was in Funland. Then again, musically, there's no logical connection between them and Centro. Wonder what happened to those guys too now that you mention it...will have to check out some of Schmidt's solo material. Thanks again J.

This comment isn't post-specific but I just want to thank you for maintaining this blog; in the pre iTunes age I lost most of my vinyl in a fire and although I tried to replace many with CDs some I just can't find. I've found way more than a handful of albums that I'd been looking for. The price of the rapidshare account is well worth it. I look forward to new posts like I used to look forward to release dates. Peace!

Thanks mwothe! The way you put it, that's a lot to live up to, but I'm glad you've had success finding things on here. If there's anything in particular you're looking for just let me know.

Funland - one of the best from Dallas!
So, updates on Will & Peter were good & accurate - thanks!
Additionally, guitarist Clark Vogeler went on to join the Toadies, who he still plays with today. He also is a video editor out in LA.

The Funland Band is so far superior to Sweetness, I can't really begin to explain how off base that comment is.

Thanks, I have their Dead At Last cassette, if this is the same band.

Such a great band to see live!!! We had so many great bands is Dallas during this time. Peter had a band before Funland called Three on a Hill that was very good also.

Yes, the "Dead at Last" cassette is from the same Funland band. They gave away that cassette at their last shows before they broke up in 1996. It contains early material of the band, when they were called Melt, as well as some unreleased Funland tracks.
Peter's post-Funland work is a bit different from the raucous sounds he gave us in Three On A Hill & Funland, but it's still very good music - search it out.

Lived in Dallas and hung in Deep Ellum--lotta great bands and generally a chill scene (except for that skinhead period). Saw Three on A Hill a bunch, they have a great live a cassette, and I really dug Melt. Would love to find some tracks from that era. Liked the Funland record—except for the obligatory cover which was indeed all the rage those days. Saw them in Chapel Hill for a sparsely attend show and Peter said he hated that record. The post Sweetness stuff was OK, but some of it seemed like an over adjustement from what they considered to be an overly polished sound. Although Impala, Satellites and Garage Sale were solid songs.