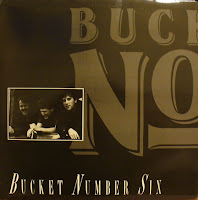 For a young indie trio hailing from the Midwest in the late '80s, you'd think Bucket Number Six would be blazing a path bejeweled with power chords and post-punk exuberance.  Not so fast, at least as far as these suburbanite, Chicago denizens were concerned.  I'm tempted to hurl the ol' "cowpunk" tag at 'em, like so many horseshoes pitched at a stake in the ground, but truth be told, they're not a terribly aggressive lot.  More roots-rock than country, BN6 nonetheless pile on twangy, slide geetar licks generously on their opening salvos "Fallen Heroes" and "Blues for Orson."  It's a sonic motif that's employed prominently on this self-titled platter, but if it's more conventional fare you're craving, "Underneath a Mississippi Moon" and the Jackie Robinson paean, "Only the Ball Was White" flow more in the vicinity of the Feelies.  Found this archived article regarding Bucket Number Six over at the Chicago Tribune, that's fairly revealing.  From what I've been able to glean online, this was their one and only album.

I knew a hardcore band from Chicago called Bucket #6 once, but I don't think it was these guys.

There have been a bunch of Bucket Number 6's over the years. View
the link in the aricle in my post for more info on the cultural reference that inspired their name.

Hi, I played in this Bucket Number Six. We did one other album, which was called "High on the Hog": https://www.amazon.com/High-Hog-Bucket-No-6/dp/B0012UTK8K and https://www.discogs.com/Bucket-Number-Six-High-On-The-Hog/release/10236786