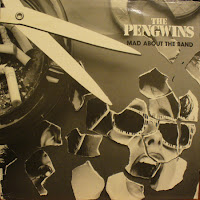 Although the Mad About the Band ep was a product of the late '80s, The Pengwins run actually spanned 1976 to the early '90s.  Hailing from the environs of Fort Worth, Texas the five-piece Pengwins composed deftly honed power pop (or thereabouts) that could typically slot somewhere between the Plimsouls and Rubinoos, though not terribly derivative of either.  Mad About the Band was the group's lone ep, and luckily for them they nailed it perfectly, exuding the kind of acumen and moxie that most bands with ten times the back catalog are capable of.  Recently, frontman Lannie Flowers was gracious enough to personally furnish me with an album's worth of Pengwins outtakes and singles, of which I'm sharing two songs from along with the entire six song ep.  Included is the sumptuous single side "Life After High School," which deserves it's rightful place on any given Teenline compilation, or for that matter a homemade mix disk.  More Pengwins material may follow, but in the meantime, you might be interested in acquainting yourself with Lannie's solo albums Same Old Story, and last years Circles.

plus: I'm On Your Side
Life After High School

Sorry to come to this late got the bandcamp comp that has the pengwins, any chance of a repost would be greatly appreciated. Thank you

Any chance for a re-up of this gem? Thanks!

May I please ask for a re-up?