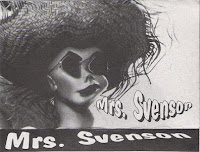 Regina, Saskatchewan's Mrs. Sevenson made it onto my radar a good decade or so after their demise when I was running a Google query on Big Drill Car.  Turns out they had shared a gig or two with BDC when Mark Arnold and the boys were treking it out in Canada in 1989. That got me thinking Mrs. Svenson were worth investigating, and before you know it, I found my merry way to their Myspace page.  While I'm still trying to track down the band's 1995 Flood CD (brother, can you spare an upload if you have it?) I did find this six-cut cassette demo on Ebay a few months ago.  No liner notes or even a track list were furnished in the tape sleeve, leaving me to my own devices as to what the titles are.  Their aforementioned Myspace hovel does feature about a dozen tunes, helping me out with half of the tracks, but I still need the titles of songs 1, 2 and 6 (I think the first might be called "Stoned").  Speaking of which, that particular number packs a devastating hook, and for that matter a sweet resemblance to fellow Canuck's The Doughboys.  By and large, the proceedings follow suit, but I have a hunch that elusive Flood album would really the deliver on the promise of this tape.   Below you can check out their low rent video for "Home."  Enjoy (or not).

Hi, this is Dan from Northwest Noise. Give me your e-mail adress, and I would love to send you the rest of the Treeclimbers EP. Cheers!

This is really good, hopefully you can track down Flood.

Hi Dan. Thanks for commenting. If you want to send me some Treeclimbers MP3s they can go to: inlightstatic@gmail.com Would really appreciate it.

Re: Mrs. Svenson - For all the fans of this demo - Mrs. Svenson was a great band that sadly is no longer. Even sadder, their "Flood" CD was never released. Not sure where this Demo was recorded, but most songs here are longer versions than the songs that were to be put on "Flood." I need permission to post or pass on "Flood" in its entirety, but at least I can give you a proper track listing for the songs posted here. Here ya go - Enjoy!!

Thanks Oxy! Appreciate the tracklist, and hopefully you can share Flood at some point. Please keep us posted (you're welcome to email me through the address in my profile as well).

I know this blog is fairly old but I was googling the band since I was feeling nostalgic and had the Silent Mind cassette back in high school. The Flood album has been uploaded to YouTube by TerribleCrayon as have their other works. Cheers. :)