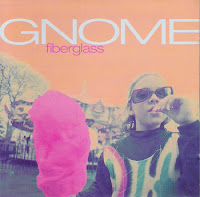 I recently had a request for this, and given the group in question I'm happy to oblige.  Of all the unsung Seattle bands that managed to protrude ever so slightly out of the Pacific Northwest spotlight in the early '90s, Gnome remain one of the nearest and dearest to my heart.  C/Z Records was their humble home for this album, and their 1992 debut Six-Hi Surprise Tower, but despite decent national distribution they were lost on the public in general.  Go figure - it's not as if there was anything else going on in Seattle to distract folks at the time.  That record was a slow grower, but over the years (and frankly decades) I came to revere the modest, roughhewn charm of Six-Hi...but Fiberglass was a quantum leap in Gnome's development, in which the quartet brought plump, Nirvana sized hooks to the table, not to mention a far bolder sonic aptitude.  In short, Fiberglass is either a colossally heavy power pop album or a wimpy stab at grunge.  The album proved to be their coda, but they capped it off with one of the most compelling songs of their brief tenure, "Hey Phoobie." Any Gnome fan worth their salt knows that mouthpiece Loren Evans possessed one of the most unique timbres in indie rock, but from what I can glean online it appears he's retired from the rock and roll rigmarole.  For shame, because Gnome were onto something special.  BTW, Loren cut his teeth in another little known Seattle outfit called The Treeclimbers, whose music (well, a couple songs anyway) can be heard here.

This is amazing. Thanks to you and whoever requested it.

Also, Lastfm says it is a "Japanese Black Metal" one man band. They are so funny sometimes.

There is a Gnome that is a Japanese Black Metal one-man band, so that isn't a misprint.

Could you reup please? Thanks in advance!

Such a nice blog and i appreciate your all efforts about your thoughts. it's really good work. well done.
FRP blower