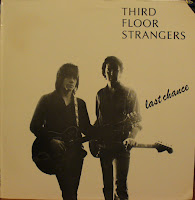 Here you go, sharp as a tack power pop from the Queen City, Buffalo, NY.  If you discovered the Third Floor Strangers as woefully after the fact as I did, it was likely due to the inclusion of this album's title track (an instrumental no less) on the Teen Line Vol 3. (Hyped to Death) compilation.  While the liner notes point to similarities to Big Star (true that) it was evident that TFS were a product of their own era as well, lending Last Chance to listeners with an ear for contemporaries like Shoes and Fools Face.  "Don't Blame It All on Me" and "Lorraine" (the latter also released as a single) are model examples of the Strangers genre of choice, and even if Last Chance isn't a wall-to-wall goldmine it's still a beaut.

Awesome! I was a fan back in the day. Originally called The Tourists, they were, along with The Jumpers and The Enemies, my fave Buffalo band. Thanks for this!

No problem. Too bad we'll probably never see propper anthologies of that sweet trifecta you rolled off in your comments. The This is It compilation was a nice start, but it left me wanting more.

You never know. If Bob James thought there was a market for it and he could raise money for his causes, I'm sure he'd put out one on his string of bands. ... I'd love to hear the full Restless radio broadcast (Detroit) where he was working with members of the Jumpers and Enemies.

You are the king. Reference to the Teenline series was great. (But please, when are they going to fill in the rest of the alphabet?) I haven't listened to this yet, but with your comments and those of the other commenters of its greatness I have no doubt.

Thanks for this! My teenage McVans years revisited.

Does the jacket list personnel? Yes, they were formerly the Tourists then that pesky Annie Lennox had a band first named that before changing it to the Eurythmics. I also loved the Enemies - were at all of their McVans shows...my ex was in the Tourists. Those were great years to live in Buffalo!

Last Sunday at Bomp power pop guru Gary Sperrazza's memorial party, all young wannabe bands just got SCHOOLED by the Jumpers who are as feral and vital as ever. And as their peers are aging out, the Jumpers may re-write history to emerge at the top of the heap! The Shoes and 20/20 better take their heart medication and start practicing...

Merry Christmas! Please add this to your list or re-ups. Thank you!