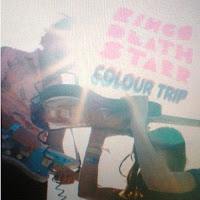 The genre of choice for this Austin outfit has been termed everything from, shoegazer to dream pop, to the cryptically nonsensical slab of nomenclature "The scene that celebrates itself."  Frankly, that so-called scene has valid reason to rejoice over the first domestically released full length from Ringo Deathstarr (actually broken out as Ringo Death Starr on the CD case).  For all their My Bloody Valentine indebted derivativeness (borrowing from Isn't Anything almost as much as Loveless) Ringo Deathstarr put a dazzling twenty-first century spin on Colour Trip, sparing listeners no sonic expense as they sublimely ratchet up a bevy of deliriously sophisticated arrangements.  As much as they employ their requisite pedal effects and disorienting tremolo, this Central Texas triple threat are through-and-through Anglophiles at heart.  The bouncy stride of "So High" smacks distinctly of The Primitives, while the dueling fuzz-fests, "Tambourine Girl" and "You Don't Listen" are the unmistakable byproducts of an acute Jesus and Mary Chain fixation.  Some considerably more obscure touchstones, namely the Nightblooms and Medicine appear to inform the proceedings of this blissed-out half hour of power, but for anyone who can't get their fill of more recent buzz bin entries like The Pains of Being Pure at Heart and the Daysleepers, Colour Trip strikes all the right distortion-ridden chords.  Ringo Deathstarr have done their homework and are putting in for extra credit big time.  There are some astonishingly grand moments here.  Colour Trip is available from Amazon and Sonic Unyon.
Posted by spavid at 8:28 PM

great album! And nice you're mentioning The Nightblooms. One of my favorite dutch bands ever (I'm dutch). If you're interested I can share their 1992 Butterfly Girl EP (http://www.discogs.com/Nightblooms-Butterfly-Girl/release/709032). Just leave me a note.

I'm all set with the Butterfly Girl ep, but if you want to share for the sake of everyone else please do. Thanks.

Thanks for the ep
Please share the first album