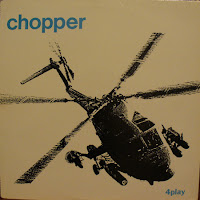 I don't think I realized it at the time when I purchased this ep from Lost Weekend Records in Columbus, but vocalist and guitarist "Stevo" listed on the back cover was actually Steven Deal, who also served as frontman for Bleached Black. I've delved into their discogrpahy twice before on these pages, including quite recently.  Stevo's next act, Chopper followed quickly on the heals of B/B debuting with the 4Play ep in 1989, a zippy set of riveting, three-chord power pop, boasting a pair of perfect-tens in the guise of "Caitlin Cries" and "Bloodspill."  All four songs would later appear on Chopper's self-titled debut, which initially saw the light of day on Zero Hour Records, and later on Big Deal Records.  Two more Chopper disks would surface on Big Deal, Slogans and Jingles in '93, and Madhouse on Castle Street in '95, the latter of which I don't ever recall seeing.  They also pulled off covering the Nerves legendary ep in it's entirety.  That's what I call, ummm... nervy.

Update 2/13:  Frontman Steve Deal passed away earlier this month, taken from us way too early.  Chopper self-titled debut has recently been reissued, upgraded, and is available for purchase here.

Yea a great EP. When I first heard it I quickly rang Stevo and ask him if I could release it in Australia. that became the debut CD on my label Zero Hour.

I'm about to reissue that CD with a bunch of bonus tracks. look out for it at www.zerohourrecords.com.au

Hello,
can you, please, repost this EP?
Thank you very much
Stathis