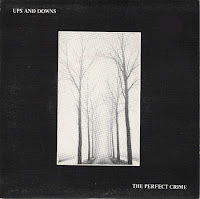 From my vantage point, the Ups and Downs weren't even close to being a household name in their native Australia, let alone the world at large, but it strikes me that just about anyone that encounters their music develops an almost immediate affinity with these unsung, indie guitar-pop heroes from Brisbane.  The meat and potatoes of their discography consists of two proper albums, 1986' Sleepless, and Underneath the Watchful Eye arriving two years later, both of which you can listen to by clicking those oh so convenient hyperlinks.  On top of those long players were singles - and a healthy stack of them.  This entry doesn't encompass the Ups and Downs entire catalog of 45s, rather it's limited to the five that I personally own.  Presented in chronological order, they trace the band's evolution from edgy, post-punks with a penchant for ringing licks and vigorous delivery, to the distinctly leaner and more refined group that would craft the mellower but thoroughly sublime "Safer" by career's end. 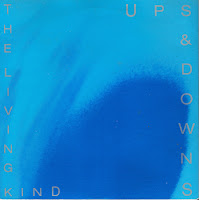 For the most part, the A-sides made it to the albums, while the flips were far more inconsistent, ranging from the chilly "Painted Sad" that could pass for an early For Against outtake, to rank throwaways like "Househunting" and the backwards tape experiment "Traeh."  I hesitated to include the Up's final single "Untie Ian"/"Safer," as the same versions appear on the Rash ep , which I shared all the way back in 2007.  Both songs are pretty phenomenal though, so I suppose they belong with this singles collection as well.  By the way, the scan of the silver mylar sleeve for the "In the Shadows" 7" didn't translate very well with my scanner, as you'll no doubt see when you unzip everything.  Enjoy (or not). 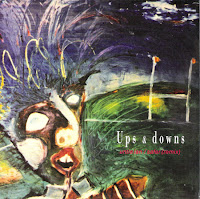 Thanks! "The Living Kind" is one of my favorite 80's tunes. Interested in hearing the other material.

Thanks for this, having problems with the download though... I'll try again tonight!
Great blog! I ran a link your way!

Amazing, this is why I visit your blog. Got hooked on Ups & Downs a while back, but haven't been able to enjoy these cuts since I don't own a record player.

Super psyched to hear these new b-sides, thanks a million!

Every time I think I have scored some rare vinyl, I get to read about it on your blog. Well done sir.

Any chance you ever added "Living Inside My Head" (1984) to your collection??? Otherwise, thanks for the posts. I'd only ever heard them on the "CountdownUnder" comp, so nice to check out some more of their tunes. Cheers, M.

this is so good! anything else by this band would be excellent

Any chance of a re-up of this and the 'Rash' EP. Many thanks for your time!