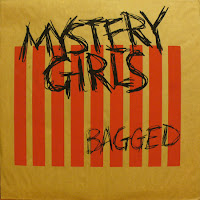 I've dedicated no small amout of space to the Junk Monkeys on this blog, a Detroit-area powerhouse that took my eardrums by storm in 1991 with their third album, Five Star Fling.  A fourth and final record, Bliss, would follow a couple years later, but splitsville was on the horizon.  After the divorce, there would be no more going forward for the Junk Monkeys, so my only option for getting my junk fix on was to explore their back catalog, primarily consisting of two indie LPs, Firehouse and Kick Out the Jelly.  That excavation took place in the mid-90s, but a friend would soon enlighten me of a rather elusive missing piece of the "Monkey Puzzle," so to speak.  It turns out that the Monkey's originally began life as the Mystery Girls, and they recorded a seven-song ep, Bagged, under that moniker.  Problem was, it was more of a challenge locating a copy of it than finding Firehouse and Jelly, yet persistence paid off and my friend shelled out $40 or so for one making the rounds on Ebay.  While I've had MP3s of Bagged for what seems like eons at this point, it wasn't until a few weeks ago that I finally scored my own copy, and I'm sharing the brown paper bagged record in all it's illustrious glory.

Ostensibly, the Monkeys hadn't gotten their mitts on any Replacements albums prior to committing this to tape.  The Mystery Girls lineup was identical to the Junk Monkeys, yet a different aesthetic prevails here, one seeped in glammy bar rock with punk and blues inflections.  Bagged is a solid and invigorating set of searing rock and roll, but isn't quite as essential as any piece of the Monkey's canon.  It's still an intriguing artifact, not to mention quite a treat if you're a fan.  BTW, tracks 5 through 7 are live.

Cool. Ive become a fan of the Junk Monkeys because of this site.
Is there any chance someone could reupload Five Star Fling by them?

I just re-upped Five Star Fling. See the post above or the original entry.

Amazing! Thanks so much!

Huge fan of this blog!

Never heard of the Junk Monkeys and they're great. Thanks a lot. Any chance of relinking Kick out the Jelly?

Could you please re-up this one? Never heard it before.

I'd love to hear this one as well. Could you re-up?