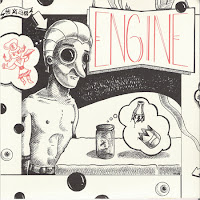 San Fran's Engine 88 were initially known simply as Engine before they scored a deal with Caroline Records in the mid-90s.  Under the truncated version of their moniker came this 45 on L.A.'s short lived indie imprint No Life Records.  The A-side "20," is loud, proud, and sinewy indie rawk, subscribing to the nosier sonic attributes of Superchunk.  The flip, "She Breaks a Bottle" would be rechristened "Bottle" for Engine 88's debut LP, Clean Your Room.  Leadman Tom Barnes' sung/spoken technique (be it deliberate or not) is somewhat akin to Craig Finn of The Hold Steady and Lifter/Puller.  Merely a casual observation on my part.

I saw this band open for a Jawbox & Jawbreaker show in Detroit. Never heard this 7in, thanks for the post!

Hello,
Can you please repost this 7''?
Thank you very much
Stathis