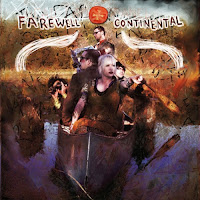 For someone like myself who can attest to being a tremendous fan of Motion City Soundtrack (their first three albums all made it into the top 50 of my '00s album chart) I almost missed the boat on frontman Justin Pierre's new-ish side-project, Farewell Continental.  Maybe it's all the time I spent updating this damn blog that allowed me to get distracted from the fact that F/C issued their first ep a full two years ago, and put out a lengthier and doubly rewarding second ep in December of last year.  Furthermore, were it not for a link on a Myspace page, I just might have missed out on seeing this Minneapolis quintet live in the flesh at a skatepark just up the street from me last week.  All personal concerns aside, Farewell Continental who feature Justin on co-lead vox/guitars, and newcomer Kari Gray on co-lead windpipes and keys are quite a find, and just as substantial an entity as MCS.

This is going to strike most of you as a pretty esoteric analogy, but Farewell Continental are to Motion City Soundtrack what Joey Cape's Bad Astronaut project is to his more renown band, Lagwagon.  For Justin Pierre, F/C functions as a parallel outlet to his much more solvent meal-ticket (MCS), incorporating a warmer and sonically textured ethos strewn across a relatively familiar canvas.  Am I making sense to anybody?  Here's hoping I am.  Case in point would be the melody-endowed vocals, who Pierre and Gray trade virtually anywhere the needle drops on ¡Hey, Hey Pioneers!  The transitions not only dovetail seamlessly, they're downright logical given the consoling, 'I've-got-your-back' tenor of "The Greatest of All Time (How You Feelin' Now?)" and "Capybara."  For those familiar with Justin's often barbed and acerbic pen, this will come as quite an innovation, but if I'm suggesting that our man has gone soft on Pioneers!, Pierre unfurls his trademarked, unhinged tendencies on "Mad Operator" and "Who's the Boss?"

Despite the absence of wonky, hyper-drive synths that have gone such a long way in filling out Motion City Soundtrack's signature sound, that fallback isn't necessary for Farewell Continental, who are succeeding (at least artistically) purely on their own merits.  The hidden charm of ¡Hey, Hey Pioneers! is that you need not have an appreciation or familiarity of the antecedent band I've mentioned ad nauseum in this critique to enjoy it.  BTW, I've read of Superchunk and Get Up Kids comparisons to F/C, but I'm not buying in.  Buy ¡Hey, Hey Pioneers! directly from Paper + Plastic, or from your digital vendor of choice.
Posted by spavid at 4:08 PM

One of my favourite albums of the year so far.

I seem to love anything Justin is involved with haha.

I'm totally with you there Josh. It seems like Justin can do no wrong.