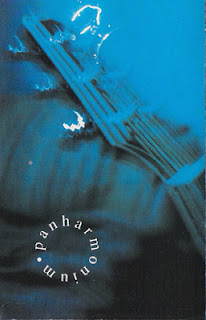 This is a follow-up to my initial I-Rails 7" post from a couple months ago.   That record featured two superlative tracks, "Same Old Me" and "Everyone's in Love" that any band of their ilk would give a collective right arm for.  Well, today I'm offering six times that serving in the form of the I-Rails Panharmonium cassette album, the last in a series of four (Valentino Says, Unfocused and Nine Songs from Nowhere preceded it).  I made a point of mentioning that leadman Chris O'Conners would go onto commercial success in the mid-90s with the highly dissimilar Primitive Radio Gods, and moreover that the I-Rails were another barrel of fish entirely.  And what would that barrel entail you might ask?  If the likes of Dramarama, Gin Blossoms, Toad the Wet Sprocket, and Superstar Carwash-era Goo Goo Dolls are at all enticing to you, chances are you've stumbled onto a gleaming nugget of gold here.  The aforementioned single, particularly the b-side "Everyone's in Love" packed more grit than many of these songs combined, but the  side of the coin, "Same Old Me" but "Disconnected" and "Behold" are pretty damn propulsive in their own right.  Why the I-Rails didn't skyrocket in the same manner PRG did is beyond, because everything was perfectly in place on Panharmonium.  If anyone has any leads on the other three I-Rails tapes, there are some more than willing ears in these parts.

Wow wow wow. I've been a huge Primitive Radio Gods fan for years and have been (unsuccessfully) looking for I-Rails material just as long, so this is like the holy grail to me. And on top of that, it's an amazingly good album to boot. Thank you so much for sharing this with the world.

This is great stuff, a shame the other releases are so hard to find. Would love to hear more from these guys.

I-Rail fans!! I'm blown-away. I'm a giant fan as Panharmonium has been in my Top-20 Albums of all-time since this came out in 1990.

I have a 2 live DVD's of their shows.

I will contact the author on getting this out. Or at least for private use.

I'm glad I managed to do some good haha.

Hey Mr. spavid - what happened with daveback? Are you absorbing the I-Rails rarities as we speak? I eagerly await your reply! Cheers!

Absolutely blown away. The I-Rails have been my favorite band since the 80s. I'd go see them every chance I could when they were gigging around Santa Barbaba/Ventura at Alex's or Charlies, etc. Their four albums shaped my soul. All four were stolen out of my car in the mission district of SF back in 1993. Since then, I've searched ebay and the internet in vain, hoping to one day get them back. I did get the 7" LP, but no other luck.

I cannot thank you enough for sharing this. I wore out Nine Songs as well as Panharmonium over the years. To have this digital now is over the top. @daveback, if you could get the other 3 also, I'd lose it! (Tell Chris the friend of Julie Shannon who used to bounce off the walls at Alex's would forever be greatful!)

Keep your eyes pealed. Hopefully some more I-Rails will be resurfacing soon.

What are the odds of anyone having a decent lyrical transcription for Disconnected? My band is gonna give it a go and we wanna say it right :)

I got an email from Jeff Sparks as he sent me the files for their last 2 I-Rails album that was recently digitized from the source. So the versions are as best as they can get especially from the cassette files that I did 20 years ago.

If you want the dropbox link, just let me know and I'll send them over to you. The songs are in such good quality, it's almost like you were in the studio with them listening to them before they made cassettes of their songs.