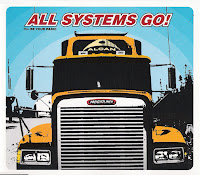 Ten years ago, when the news broke that alumni from the Doughboys (John Kastner) and Big Drill Car (Frank Daly, Mark Arnold) were forging a new musical alliance under the name All Systems Go! this drooling fanboy was licking his chops in complete and utter anticipation.  The prospect of a pop-punk "supergroup" comprising the key talents of two of the genres most consistent, talented, and gratifying bands of the '80s and '90s, was seemingly too good to be true, but when ASG's self-titled puck hit the ice in '01 my expectations were met in a huge way.  The album featured Kastner and Daly manning the microphone, barreling through eleven short and sweet numbers, including some of their career best, namely "Vodka Sonic" and "Can't Stop Getting High." All Systems Go owed more of a debt to Big Drill Car than the Doughboys, but when Daly departed before ASG's follow-up, Mon Chi Chi in 2002, the band's tenor shifted, if only marginally.  For that sophomore album, Daly was replaced by Tom D'Arcy, who had more of an active singing roll.  Mon Chi Chi's choicest offering was the incessantly catchy "Tell Vicky," a not so thinly veiled vignette that comes off as equal parts fiction and fact.  Moreover it was ASG's finest achievement, and my single most favorite song of '02. 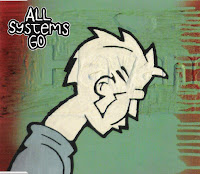 The band only racked up a slim recorded catalog, spread out over the course of two relatively available albums (which I quipped about above) and three or four CD eps that were only available as European imports.  Being that those short form releases were scarcely distributed in North America, ASG proved to be less than completist friendly.  They compensated by releasing expanded versions of both albums (with Mon Chi Chi boasting twelve bonus cuts unto itself), but the catch with those is that they were Canadian releases.  There were still a few stray tracks missing from the bonus-ized incarnations, and so far as I can tell all of them were confined to the two disks I'm featuring here.  The venerable "Tell Vicky" is present, as well a demo version of Mon Chi Chi's "Motorbikes."  For the uninitiated, these eight songs are actually an ideal introduction to All Systems Go!  In 2006, iTunes brought A Late Night Snack to market, a digital-only collection featuring several of these b-sides, padded with assorted demos and outtakes.  If you enjoy what you hear, lay down a little coin and support the band...who will hopefully return.

Once again your description was interesting so I downloaded these EPs and found the first album on Warez_BB.org Thanks mate