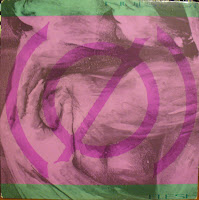 This was an impulse purchase from a few months ago.  I had been hearing very intermittent murmurings of Buffalo's Nullstadt for close to two decades, but was never proactive about investigating them.  Had I been depriving myself of something special for all the years?  I'm still trying to figure that out, and more specifically, still trying to put my finger on Nullstadt's rather unique melange of "new romantic" rock and stark, avant-synth wanderlust.  The only pertinent web-based bona fides I've managed to conjure up on this unlikely Rust Belt sextet (I believe they were only a six piece for this album) is a vintage video profile on YouTube, and an article focusing on a 2007 reunion concert which ran in conjunction with the release of a book about goth music.  Truth be told, there isn't a speck of pancake makeup or ethereal spookiness of any kind emanating from the collective pores of this band, at least at this juncture in their career.  A good reference point for Nullstadt's rather oblique stripe of post-punk is the band Japan, circa Tin Drum, though Flesh has many more layers of onion skin to peel through (with some occasional jazz improv tendencies, mechanized drum fills, and dadistic dance maneuvers not being least among them).  Nullstadt were wise enough to commit "A Similar Crisis" to video tape, as it's Flesh's most obviously accessible number.  You can witness the visual evidence for yourself below.