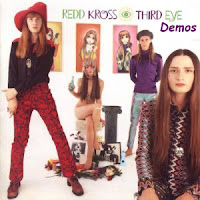 I'll kick things off by admitting that Neurotica is, and is likely to remain my Redd Kross album of choice...although there wasn't much to complain about when they turned in their follow-up, Third Eye was there?  Well, now that I think about it, I suppose I do have one gripe about Third Eye - it tanked commercially, thanks to a seemingly indifferent Atlantic Records, but I digress.  1987's Neurotica is really where R/K began to dabble around the fringes of pop music, particularly the Paisley variety.  Fast forward three years, and the McDonald clan had totally immersed themselves in bright chords and saccharine harmonies, much to the chagrin of longtime listeners who were groomed on Redd Kross' nascent punk yammerings.  The genesis of the songs comprising Third Eye weren't quite as shiny as the finished product, as evidenced by this set of demos, which include gritty, early takes of "Annie's Gone" (two versions in fact)," "Bubblegum Factory," and "1976."  Better yet, there are FIVE tracks here that never even made in onto said album: "Crazy Horses," "Baby Save Me," "Hope You Feel Better," "Teen God in an Oily Cocoon," and "Left Out in the Cold Again," (that last one exhibiting some pronounced audio issues, due to a presumably dodgy source tape).  Look for another Redd Kross post in the near future.  By the way, unless you've been living under a rock, bassist Steven McDonald has been lending his talents of late to OFF! an amazing hardcore punk revival "supergroup" (a la pre-Rollins Black Flag) featuring the Circle Jerks' Keith Morris as frontman, who sounds like he hasn't missed a friggin beat.

can't wait to hear this! but a point of order: "I Don't Know How To Be Your Friend" was on the final album; it was the third track.

Not sure how I missed that. Thanks.

Redd Kross is one of my favorite bands and i didn´t know this material.

how's about some Tater Totz???

I can't thank you enough for posting this. I've been a fan of Redd Kross for a very long time, and I've never heard these demos. I can't hardly wait to hear these. Damn the rapidshare mandatory 5 minute wait just to start the download!

Dude! Its almost as good than the original, i loved Bubblegum Factory demo version! Thank you for this pearl!

you are right. redd kross's best is neurotica. i second the tater totz request. have it on vinyl would love a digi-copy

Hello, everyone! I think it is appropriate to write here, as here brought together people who know the band Redd Kross. Somebody tell me what you know about the song "It's a Scream" group Redd Kross. The official release or not? In any kind of official CD Group Redd Kross has it? Who knows, please give information about this song. I know just what it recorded as a Soundtrack for the movie "Shriek If You Know What I Did Last Friday The 13th." But, the official CD Soundtrack is no film. I found this song just as 160kbps. Can someone tell me where to download it in high quality (eg 320kbps)?

Hey folks. This file has been pulled by Rapidshare for some reason. Not sure if someone in the band requested it be removed or if another party was responsible. Never received a takedown notice for this either. Watch this space for a possible update...

Can you re-upload this, please?

Hey thanks for re-upping this, I missed it the first go-round. I have a little bit of info for a few of these tracks that I don't think anyone mentioned. I know that a version of "Crazy Horses" was released on a compilation called the Melting Plot under the pseudonym Revolution 409. Also the tracks "Left Out" "Save Me" "Elephant Flares" "1976" were songs brought to Redd Kross by the drummer Victor Indrizzo. He sings lead on the first two and shares lead with Steve on "Elephant Flares" and is the more prominent voice on "1976". He left the band right before Third Eye was released going on to play with an impressive roster of artists. https://en.wikipedia.org/wiki/Victor_Indrizzo

Thanks patrock. Always enjoy getting the backstory to this kinda stuff.

Incredible! Thanks for this!

I know I'm 10 years late, but could you please repost this? Please?