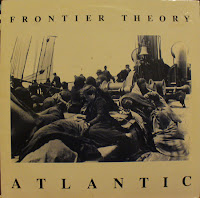 Frontier Theory appear to be one of the few vintage, D.C. alt-rock bands that haven't been adequately anthologized, or quite frankly mentioned anywhere at all.  They definitely weren't angular or edgy enough to rub elbows with the Dischord Records contingent, but upon giving Atlantic a few spins it sounds to me that Frontier Theory would have fit like a glove on the 415 Records roster, recalling the jangly but barbed strains of so many Translator and Red Rockers albums.  Am hearing some Northern Pikes and Fire Town on here as well, but more likely coincidence that a conscious effort.  Not quite an LP, but outlasting the length of a typical EP, Atlantic was followed up a proper full length, No Waltz in the Meadow in 1988.  The last few seconds of the title track have some nasty pops and snaps, due to a small scratch.  Tried to edit them out as best I could, but should a cleaner copy surface I'll be inclined to re-post this one.  BTW, producer Bob Read spent some time in another local outfit, B-Time, on the same label, who have also been covered in this past entry.  If you're lucky enough to be a subscriber to the online incarnation of The Washington Post you can read this pertinent article regarding Frontier Theory.

You were right on with the 415 Records comparison - especially the Translator reference - subtle but there. Great stuff!

I saw these guys @ old 930 club back in the day.. Drummer was in my school's jazz band class with me when I was a teen. "Summer's Over" came in my mind semi-randomly today (it's definitely autumn here as of today). I'm happy to read this post and thanks for the tune!

We have a mint copy of this if you're still looking for it. Som Records in DC. neal@somrecordsdc.com
Great website btw!

WOW. This takes me back. FT were regulars at the Grog and Tankard on upper Wisconsin Ave. I was a big fan. I have both of the albums. They also put out some music on CD (forget what it was called). I am pretty sure I am the only human walking the earth that has Frontier Theory songs on my main iPod playlist. I have Happily Ever After and listen to it frequently. Really wish these guys had hit it big.

I used to go see them at DC Space. The Kelly brothers if my memory serves me correctly... I thought they were so good, and then i heard that they were packing up and moving to California to make their fortune... and never heard from them again. Good memories

I grew up down the street from the Kellys (when they weren't living in other countries) and was friends with Bobby, the drummer. I not only have all of their published albums, I've got a couple of demo tapes recorded in their basement (all now on my iphone). To this day, I sing a version of Madeleine to my kids at bedtime.

So no, Fat Bald Guy, you're not the only one walking around with Frontier Theory on your ipod, there are at least two of us.

Loved this band but my copy has long since died. I also still have a few badly recorded copies on my ipod though. Would love to get my hand on Atlantic again.

Thank you all for your wonderful comments. This is Michael Kelley, lead singer of Frontier Theory. Those were halcyon days. I shall never forget them...

Wow! Nice to see a couple of folks I know up there in those comments. I, too, miss Frontier Theory. Such good memories. Michael - you should upload some songs to iTunes so we can all buy them, my LP's are packed away in the basement....

The one guy worked for A&M. He took me to dinner with The Blue Nile in early 1990, and he got me into a Matthew Sweet/Toni Childs gig in 1989. And free tickets to Robyn Hitchcock. I have a few mentions of that stuff on my blog.

Michael Kelley, are you or any of your brothers in bands these days? If so, can you point me toward them? I was a big fan of both Frontier Theory and Kelley (or was it Kelly) Girls.

Michael, I saw you perform in LA many times in the early 90's and loved your music. Specifically, I remember seeing you play at Genghis Cohen (sp?) I would love to hear Madeline again but don't find it online anywhere. Did you ever record that song? Would love a copy.

Light Weight - Madeline is on No Waltz in the Meadow. I think you can download here: http://wilfullyobscure.blogspot.com/2013/02/frontier-theory-no-waltz-in-meadow-1988.html on the thread for that album.

Memories! North Hollywood, early 90's, alligator lounge think it was called, accoustic show; esp recall, distinctively and to this day and will never forget 2 songs: their accapella version of I Want to be Sedated and the beautiful, their own penned: Waterville ("Telle me how's the world in Waterville?) I can still sing the line. Saw them 2 or 3 times like that then full band on Sunset Strip I think. Michael came and had pie and coffee with me once at TallyRand where i was a waitress/singer/song-writer, but mostly waitress :). Always hoped for the best for those talented Bros!

Can anyone help me get in touch with Robert Kelley, the drummer? We were good friends back in the 80’s and would like to re connect. Thanks Mark

Hope you managed to track down Robert, Mark, I knew him in high school and remember him as a nice guy.

Is there a chance this EP could get a reupload? Thanks much!