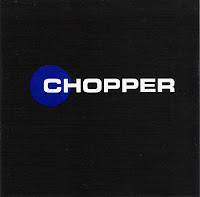 Well, I'm short on time, so this will have to be a quick write-up.  I desperately need to digitize more vintage wax, but in the meantime here's the debut album from Connecticut's Chopper a band I introduced (or reintroduced) you to a few weeks ago via their 4Play ep.  From what I can tell that ep is reprised in it's entirety on Chopper, and furthermore, the label that originally minted the album (Zero Hour) is set to reissue a bonus-ized incarnation of it very soon, so I'm only going to be sharing this for a couple of weeks.  Chopper featured Steven Deal, formally of Bleached Black, a band I've already dedicated a couple of entries to.  Crunchy, riff-addled guitar pop seizes the moment on this near-perfect bakers dozen, which happens to feature three British Invasion-era covers: The Creation's "How Does It Feel (to Feel)?, the Small Faces timeless "Itchycoo Park," and an obscure George Harrison penned track, "The Inner Light," which from my understanding was relegated to a Beatles b-side in 1968.

Thank you so much! I have been looking for this one forever!

I just reissued this CD in it's original 1990 form.. www.zerohourrecords.com.au

Hello,
can you, please, repost this CD?
Thank you very much
Stathis