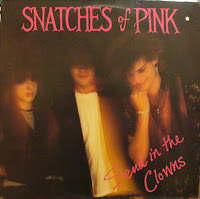 Personally, I don't think this Chapel Hill trio quite came into their own until their sophomore effort, Dead Men, which I featured on here many moons ago, but their premiere, Send in the Clowns is nonetheless a shitload of fun.  The gussied up hairdos Snatches of Pink sport on the album jacket belie some raucous dust-ups and punk-tinged hoe downs ensconced within the album itself.  There's oodles o' southern-fryed drawl etched into the grooves as well, fortunately for us not the cantankerous, old fogey variety.  Unlike the vaguely likeminded Georgia Satellites, the Snatches kick any potential "boogie" indescretions clear to the curb, and good on them for that.  I'll take the twangy rockers ("Lazy Suzan" and "Weathervain") over the lazy bar-stool ballad "Time Done Gone," any day, but by and large Send in...is all good.

After the aforementioned Dead Men LP, the Snatches would carry on as Clarissa throughout the '90s, but would return to their former namesake by the next decade, and cut a bevy of new albums.

One of the greatest bands to come out of the so-called "New South" in the 80s.

would love a re up of both of their albums if you've got them!