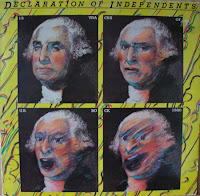 When Declaration of Independents was released some 28 years ago, a various artists collection used to mean something. These days, 90 % of what passes for "compilations" are actually label, tour, or festival clusterfuck samplers packaged in a flimsy cardboard sleeve with little regard to sequencing, annotation, and most vitally, musical consistency. For example, take Big Deal Records Yellow Pills series from the '90. For those of you well versed with those collections, you'll be quick to realize that there is virtually no equivalent for those wonderful, revelatory albums being produced today. Given that taste in music is purely subjective, there's really no such think as a "perfect," start-to-finish compilation, but the one in question here got it mostly right. With it's emphasis on "new pop" mixed in with a smidgen of roots-rawk, Declaration of Independents makes it's mission clear, literally, with thorough liner notes on the back sleeve delving into info on a band-by-band basis. Most of the contributors here are unknowns now just as much as they were back then, but a few ring familiar, including Athens, GA-based eventual cult faves, Pylon. Robin Lane and the Chartbusters made some minor ripples nationally, as well as D.C.'s long departed Razz, who prominently featured a nascent Tommy Keene. Any indie compilation worth it's salt should host at least a few worthy newbies, and there are some jewels here indeed, starting off with SVT, an edgy (and unlikely) Jefferson Airplane offshoot, who released some primo records on the then burgeoning San Francisco, 415 Records imprint. Des Moines' Luxury, and the Wyoming-based News gracefully add their respective wave/power pop variations to the canon, and Jim Wunderle contributes his spin on the Seeds garage rock classic, "Pushin' too Hard." As for D. Clinton Thompson and Root Boy Slim, let's just say they're slightly out of sync with the music that usually inhabits this blog.

Thanks much. Big Tommy Keene fan and I'm not sure I've ever heard Razz before (does that mean I'm not really a big fan?!). I mainly seek out 80's releases I missed the first go-round, but you have posted some very intriguing 90's tunes as well. Thanks for you work/sharing.

I was the manager of Ragnar Kvaran during this time and the tune here is from my record label, Stigmata Records out of Ann Arbor. Glad this great collection hasn't disappeared into the fog of history. Ragnar is now in Arizona and writing novels...

D. Clinton Thompson is the guitarist for the Morells and the Skeletons.