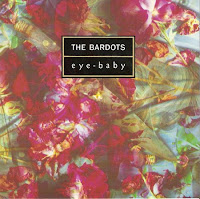 On their debut album, Eye-Baby, England's Bardots suggest the crystalline jangle-pop that emerged from the C86 movement a few years prior, as well as dream-pop bands like Revolver and Chapterhouse, indigenous to their homeland. Problem is, when this was issued in 1992, The UK was knee-deep in Manchester mania, as well as the burgeoning Brit-Pop phenomenon that threatened to take over the world. Presumably, this scenario (not to mention their label Cheree going belly up shortly after Eye-Baby's release) made it difficult for a fringe act like The Bardots to make inroads at home or abroad. It's a shame because their's plenty of gold here that any fan of say, Straitjacket Fits or Venus Beads would do smashingly well with.

1995 saw the release of the largely uneven Bardots follow-up album, V-Neck. In 1998, a compilation of singles and out of print songs titled Sad Anne followed in 1998. The Bardots releases are somewhat difficult to track down, but worth the effort if this album makes a believer out of you. You can satisfy more of your Bardots curiosity here and here.

too funny! i was just listening to their EYE BABY album today. The only reason I even know about them was because my sister had dated the bassist. I can listen to "Gloriole" over and over...

"Sunsetted" is the jam as far as I am concerned. The Bardots other claim to fame, as it were, is that the guitarist, Krzysztof, was the brother of Adorable frontman Piotr Fijalkowski, and the two went on to form Polak.

I love jangle pop, so I can't wait to listen to this - thanks so much for posting.

Wow, I don't agree that V-Neck is uneven at all. I think it's an absolutely stellar album - better than Eye Baby.

It's utterly tragic how obscure this band is.

They were linked with Suede, The Verve, Adorable and Sweet Jesus as the New Glam Association by Melody Maker's Paul Lester, weren't they?
The groups weren't interested (I think Suede and Sweet Jesus cancelled a tour together) but there's something in it.
Not really Glam at all, though; more like shoegazers who've stopped gazing at their shoes (like the early, hazy Suede of 'To The Birds').