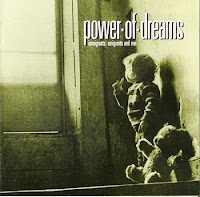 Dublin's Power of Dreams appeared to have the talent and drive hometown heroes U2 made good on, but the fickle music press, and record buying public at large, had other plans. Sonically, POD packed a wallop, almost arena-like in aesthetic, sans the pompous self-indulgence. Their full-length debut, Immigrants, Emigrants and Me, alternated between themes of wide-eyed optimism, and the sobering realities of mortality and romantic loss. It was to be their only North American release, and though it sank without a trace on our side of the Atlantic, the band built a respectable reputation in the UK and Ireland, on the strength of the "Never Been to Texas" single (although album cuts "100 Ways of Killing a Love" and "Mothers Eyes" made a bigger impression on these ears). 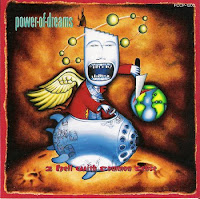 1992 saw the release of the more captivating 2 Hell With Common Sense. POD struck an even greater melancholic tenor here, and with it a robust, layered guitar sound, echoing through such gripping moments as the opener "Rain Down," and "You Bring Me Flowers," however the relatively headstrong "Slowdown" that follows, indicates all hope has not been dashed. Immigrants... is good, but 2 Hell...is a marked improvement.
Power of Dreams last truly commendable album, Positivity, drew much of it's material from singles and EPs. Initial pressings also included five live tracks as an enjoyable coda. Not a bad place for the uninitiated to start, considering it houses some of their most visceral moments, including "See You," "Inside Out," and Still Lost" all in the same sonic mold as the bristling, guitar-savvy 2 Hell With Common Sense. 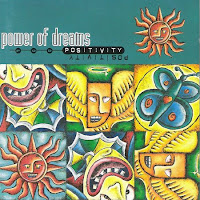 Additionally, Power of Dreams released a bevy of singles and eps, a singles compilation dubbed American Dreams, and an ill-advised parting shot in 1994 with Become Yourself, an album that bore little resemblance to the far more representative titles discussed in this post. Immigrants and 2 Hell were ripped from the Japanese import versions, both including bonus tracks.
A full discogrpahy can be obtained here. The band's Myspace page indicates there were some POD reunion shows in 2007. With their entire catalog long out of print, I'd say a reissue campagin is in order...
Immigrants, Emigrants and Me
01. The Jokes on Me
02. Talk
03. Does It Matter
04. Much Too Much
05. Had You Listened
06. Stay
07. Never Told You
08. Bring You Down
09. Never Been to Texas
10. Where is the Love
11. Maire I Don’t Love You
12. 100 Ways to Kill a Love
13. Mother’s Eyes
14. My Average Day
bonus tracks (Japanese release)
15. American Dream
16. Not Enough
17. Never Told You (live)
18. Where is the Love (live)
19. Break on Through (live)
2 Hell With Common Sense
01. Rain Down
02. There I Go Again
03. On and On
04. She’s Gone
05. Untitled
06. 100 Seconds
07. You Bring Me Flowers
08. Understand
09. Slow Down
10. Happy Game
11. Metalscape
12. Blue Note
bonus tracks (Japanese release)
13. Fall
14. Cancer
Positivity
01. Cathy’s World
02. If I Die
03. See You
04. 20h Century Blues
05. Song For Nobody
06. Radioactive Generation
07. Evil Evol
08. Inside Out
09. Falling From the Sky
10. Still Lost
11. End of My World
12. There I Go Again (live)
13. Where is the Love (live)
14. Does it Matter (live)
15. Untitled (live)
16. It’s a Shame (live)
Update 12/21/09: I was recently informed that Immigrants, Emmigrants, and Me and 2 Hell With Common Sense are now available on Itunes, and as such, the links have been removed. In addition, there will also be a deluxe double CD reissue of Immigrants in early 2010! As for the Postivity compilation, this may be available on Itunes at a later date.
Posted by spavid at 4:33 PM

Nice post. I discovered the band opening for House Of Love in Toulouse when they were touring Immigrants. They were a hatd act for the headliners to follow, with their youthfull enthusiasm easily winnin over the unsuspecting audience. It is understandable that Never Been To Texas helpt to build their reputation as it really did sound as if it had been touched by the Bono rap when played lived, I still think that the song stands up well next to Bullet In The Blues Sky.

As a collector of POD stuff, and a big fan I have to defend the Become Yourself album - it is different than the rest, but sits reasonably well with Immigrants, Emigrants and Me and there are some really great tracks on it.
Also, the American Dream album (i.e. Japan only release) is fantastic.

This is absolutely extraordinary I became a fan of the Power of Dreams by album " Immigrants, Emigrants and Me", and now are two more albums of this prodigious band-90s, as a friend thank you for such a contribution, is wonderful to find people like you to share your music through this very good blog.
I'm from peru a country where there is no distant spread of this music so good, thanks to bloggers like you that we have access to these great bands like "Power of Dreams".
I can only say thank you very much for the great work you do for the good of many people like me, thank you very much for everything.

one of the greatest bands ever. I absolutely adore this band. They will re-release "inmigrants, emigrants and me" next year as a double CD with tons of b-sides (that could perfectly make an album as good, if not better than anything they have released) to coincide with their reunion tour in march.

Could you please update these post. It's not working at all. Thanks a lot.

any chance of posting up the bonus tracks from the first 2 albums?
I can't find copies to buy anywhere but I do have the UK releases of both,but I would really appreciate the extra tracks.