Allmusic can give you a much better overview of Handsome than I ever could: 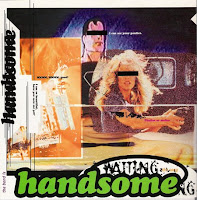 When five pieces from the splintered membership of hardcore's most influential '90s outfits came together, Handsome was formed and the songwriting, textural, and creative limits of an entire genre of rock music were expanded to a previously unimaginable degree. At its center, Handsome was directed by former Helmet guitarist Peter Mengede. While not officially credited as the group's songwriter, Mengede's very identifiable riffs and song structures seem to be a musical basis for Handsome's music. Ex-Quicksand guitarist Tom Capone also had a significant impact on Handsome's tight yet exotic hardcore grind. Joining Mengede and Capone on the band's one and only release — 1997's eponymous debut on Epic — are drummer Pete Hines (Cro-Mags, Murphy's Law), bassist Eddie Nappi, and Salt Lake City area vocalist Jeremy Chatelain.


While Handsome retained the eminently powerful lock-step guitar licks that Helmet established as their calling card, the approach is decidedly less brusque here. Incorporating just enough accessible melodicism, it's easy to surmise why a major label, in this case, Epic, would salivate over Handsome, given their multi-faceted appeal. The band's self-titled debut tanked, perhaps with the exception of the built-in fans that were groomed on Handsome's aforementioned predecessors. Needless to say, lineage doesn't necessarily spell a recipe for success.


This single preceded the album by what I'm estimating to be a year or several months (sorry, no copyright date provided). If features a bruising, early version of "Needles" that would make it's way onto Handsome in a different incarnation. The quite-loud-quiet, non-LP a-side "Waiting," represents them at their most dynamic.
A. Waiting
B. Needles
http://netkups.com/?d=fbea01152f538
Posted by spavid at 2:07 PM

The album is out of print.. Do you have that as well? When I bought it back in the mid 90s I thought it sucked, because it wasn't Helmet or Quicksand. Though rediscovering them a few years ago I am thinking, "Ah! not so bad... "

Awesome band and their full-length completely rocks. I too though didn't really get into them at first, but later grew to love the material they put out.

Thanks for posting this single!