For Against - Aperture (1993, Independent Projects) 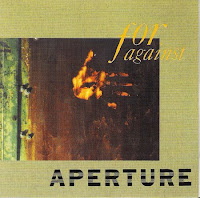 Discovering Lincoln, Nebraska's intermittently long-running For Against in the mid-90s was a tremendous revelation to me. After absorbing many hearty recommendations of the band via Jack Rabid's Big Takeover magazine, I made the plunge and bought Aperture, For Against's third proper full length. I have yet to find another artist that so effortlessly appeals to my every disposition - elated, sad, contemplative, or for that matter, even passive. To me, they're the musical equivalent of one of those contouring mattresses that are infomerical-ed to death in the wee morning hours, only For Against possess a certain magic of wrapping their pristine soundscapes around my psyche. For Against minted their sublime, clangy post-punk and proto-dream pop in the mid-80s. The two albums that preceded 1993's Aperture were Echelons in 1987, and December in '88. That pair, especially Echelons, demonstrated a chilly, vaguely goth-informed template that would soon be eshewed in favor of the much sublimely sweeter and fluid guitar pop that to this day remains an indigenous For Against earmark, as well as a healthy dollop of self-deprecation. It's hard for me to pin down my favorite For Against album. I still crave the visceral sparks emanating from the stark Echelons, but Aperture and it's two out of print follow-ups, Mason's California Lunchroom (1995) & Shelf Life (1997) are best representative of what would become the classic "For Against sound," at least in my mind. A new F/A album (their seventh) Shade Side Sunny Side was released this year on Words On Music Records, a label that's also responsible for reissuing their earlier, aforementioned recordings. Hopefully Aperture will eventually see the proper reissue it truly deserves, but for now enjoy courtesy of me. You can learn more about all of For Against's recordings here.

Reissued through Saint Marie Records.
Posted by spavid at 5:33 PM

I actually got the first For Against single ("Autocrat"/"It's a Lie") in the mail as a promo back in '85 or so. I thought it was awful and pretty much ignored them after that, though I guess they ended up being pretty good by most accounts.

Hey, if you still have it and want to get it off your hands, let me know ; )

i have already posted FOR AGAINST "shelf life" at "club amigos del .rar y ALF" if someone cares...