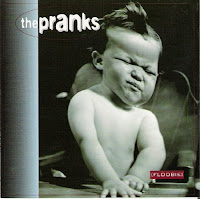 Before going any further, this is not the same Pranks as the '70s band of the same moniker, led by Jeffrey Foskett and Randell Kirsch, rather a dazzling and ultra mega-obscure St. Louis, MO quartet from over a decade ago. My acquaintanceship with the band started by happening upon a brief commentary of their one and only album, Floobie, reading something to the effect, "Like finding lost Cheap Trick tapes!" Hey, that was good enough for me, and not long after, I obtained a copy of this very scarce and elusive CD. The comparison to Rockford, Il's fab four was spot on, but the Pranks turned out to be more Next Position Please or Standing on the Edge, than In Color. In fact, the similarities are borderline plagiaristic on "Don't Cry," and "Good to Be Alive," but not a complaint considering the Pranks infectious wall-to-wall harmonies and penetrating power chords. Floobie gracefully exudes a 'good time' vibe without resorting to pedestrian insipidness or party-hearty nonsense. Unabashedly, The Pranks suggested to be something of an antidote to the Seattle hoopla of the '90s. Case in point, "Wake Up's" liberating declaration of: "We're traveling coast to coast, to clean the grunge out from your ears/rock's not a fashion statement, it's an attitude that's slept for years." Floobie's distribution was meager to put it very mildly, and it's my guesstimate that few outside the Midwest were familiar with the Pranks, although the album did see a Japanese release. Furthermore, according to the band's Myspace page, they opened for several recognizable AOR/hair metal acts, including Tesla and *gulp* REO Speedwagon, presumably in the late '80s and early '90s. Upon visiting their page, you will also learn that the Pranks continue to record and play, albeit after a lengthy hiatus. Many Floobie selections are posted there as well, so don't be surprised if I nix this post in the not-too-distant future, if ya know what I mean, but apparently there are no plans for a reissue. Very highly recommended.

Would be awesome if you could re-up this one. Many thanks either way.

Hay, I'm Mehtab Gill there is my YouTube channel (Prankiyee!) and here is a crazy prank (Mobile Snatching prank!) out there go and must watch this but don't forget to like and subscribe our channel...