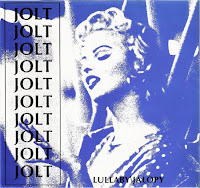 For starters, this isn't the late '70s ,British power-pop act, but even if that's who you were expecting, stick around. This particular Jolt were from California, and to my knowledge, released vinyl 45s exclusively. No albums, no CDs, just singles. Perfect for the ADD contingent out there. 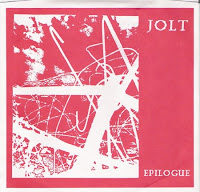 A little under a year ago, Ready Steady Smash blog posted a Jolt feature which you can peruse here. Jolt's crucial "Lullaby"/"Jalopy" and "Burn"/"Epilogue" 7"s were featured. This inspired me to do a more exhaustive Jolt overview, showcasing the aforementioned along records with four others that I know to exist. 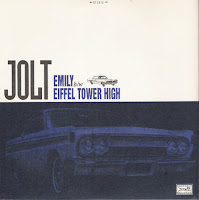 A trio based in Fremont, California (according to the sleeves anyway), Jolt weren't the stuff of legend, nor were they anything resembling a phenomenon. Not by a long shot in fact. Building a modest underground following, seemingly by word of mouth alone, anyone who came in contact with their raspy-throated, but roaring punk-pop became an instant fan. Jawbreaker were Jolt's prevailing influence, and while they didn't share Blake Schwarzenbach and Co.'s assaulting modus operandi, they pushed the melodic envelope as far as bassist/mouthpiece Paul Duarte's strenuous croon could extend without completely konking out.


Armed with romantic, heart-on-sleeve aplomb, Jolt's yearning, slice-of-life motifs could be passed over as pedestrian in terms of lyric-sheet fodder, but the trio's ability to bring their verses roaring to life put them in league with creme de la creme contemporaries Samiam, Jawbreaker (once again), and dare I say Green Day? 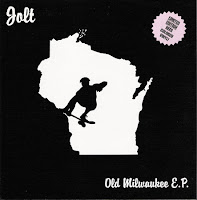 wow! just last week i went on an internet search for jolt and came across the ready steady blog. then a search of soulseek uncovered a few more of their 7"s. now the whole kit and caboodle! i used to put these 7"s on tons of mix tapes. that last ep was a stinker though.

i think they actually have some other songs on a couple compilations too. i was just about to go to a bay area record store to look for them, and some other items. i'll let you know if i find anything.

cool blog. i'll be checking out more of your past entries. looks like good stuff along the lines of my own cheap bin and obscure finds.

From one Neal to another. Wow, what a coincidence. Glad to hear this post fit the bill! Keep me posted on those comps.

where did you find the buzzsaw pressing of the burn 7" with the red
on white sleeve? i was just told there were only 50 copies of that.

This is a great post. I just got finished listening to a few of these 7"'s. Forgot about the Lullaby 7", but I know it's in the collection somewhere. Thanks for the post!

Paul used to live in the same apt. complex as our singer Metalhed back in 93/94 when we were first getting the Eyesores together- he even sat in on a couple really primitive recordings before we ever played live. What might be of interest is that Gnu (our drummer) and I were part of Jolt for about a week or so- we recorded one song that ended up getting redone by the Eyesores called Buzz. I think it was supposed to go onto a French comp CD, but I haven't seen hide nor hair of this comp CD. Anyway, let me know if you're interested in hearing it- it's more punk rock and a little rougher than most Jolt material I heard, and was done about the same time as the Emily/Eiffel Tower High record (which he played on himself, doing all the instruments). Had some funny party adventures with the guy too!

Wow, thanks for a definitive refresh on Jolt. I remember these guys real well from the early 90's Gilman St. scene. I was just going through my old 7"s and discovered your blog after searching for more info on whatever became of Jolt.

Some notes: My copy of the Jolt/Wynona Ryders 7" is on Homemade Records (Berkeley), while my copy of the Old Milwaukee EP has a slightly different cover because it was issued (re-issued?) by Rhetoric Records. So it seems like at least half of their records were issued more than once or by multiple labels.

Also, their excellent song "Let It Go" appeared on the "This is Fucked, This is Shit" split 7-inch, along with songs by J-Church, Jabberjaw, and Good Grief. It also can be found on the "Shreds, Vol. 1" CD compilation on Shredder.

thanks, love your blog! keep up the good work.

Anyone have lyrics to Lullaby? Need em desperately.

There aren't any lyrics on the single, just for your info (unless mine is missing an insert).

Hey, I discovered your blog through this entry.. I really like the stuff you cover.

Glad to hear people are still interested in Jolt, I wasn't in the original line up but I released some of their music on my label Homemade Records and then played guitar in the group for a few months and we released a song on the Outpunk Dance party compilation, although that definitely made us part ways, troubled people in troubled times, but the music AND stories were great

Btw, the Jolt Winona Ryders split EP was released by me on Homemade Records, not THD Records, Jason was a friend at THD but unless he did an unauthorized release later, it did not come out on his label.

Ahemmmmm Jason, I totally wouldn't have minded if you did this, all you had to do was ask, if the previous commenter is mistaken, then just ignore this, but hello after many years if you are reading this

I have none of the recordings anymore so I am hoping to fond a torrent with as many as can be found, any ideas?

i was best friends with paul, i even sang back-up on headache. he recorded the demo tape in his livingroom with jim and i. i still have 'proof of total collapse' demo. our lives at that time strongly influenced his lyrics. we both had are demons, for info or anything email me fred.sub@gmail.com

Like everyone else, found this while googling Jolt after listening to some old 7"s. Read that Paul was last known to be living on the street in NYC as a junkie. If true, very sad. Hadn't known about his drug problems until now, but "Celeste" seems much sadder now...

Thanks for posting this! I bought all of Jolts 7"s at Double Decker Records last year and I wanted to put them on my Ipod. Thank god you already have the file up. Saves me some time, haha.

Jolt is one of those 90's punk/pop bands that were so good, yet are never mentioned. Sad

This is one of the best bands if not THE best of the genre. PLEASE reup this. So.many folks are being cheated out of hearing them. Thanks.. .

This is one of the best bands if not THE best of the genre. PLEASE reup this. So.many folks are being cheated out of hearing them. Thanks.. .

I don't say thanks enough, but you're awesome. Thanks for posting this (and everything else)!