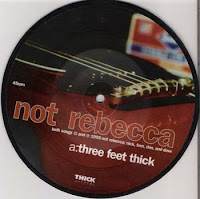 I often ask myself why I'm so utterly remiss at adorning and garnishing this corner of the blogosphere with something stimulating - you know snazzy colors, backdrops, creative sidebar and header graphics...I guess I can chalk that up to ny own ignorance and laziness. Maybe one of these days I'll be motivated enough to embellish Wilfully Obscure with the desperately needed atmosphere it's been screaming for over the past six months. Until that time, I present you the first installment in an ongoing year-long series that will shall be referred to as Singles Going Single.


7" inch singles. I've got a bunch. A lot in fact, including a tons of virgin vinyl just waiting to meet the needle. Of the majority of bands represented in my collection I have multiple titles. This series will focus on the single, singles. Not necessarily bands that have just released one 45, rather the prerequisite here is that I have no more, but no less that one solitary slab of 7" wax by any given artist. Yeah. As if you know I'm not cheating. Just take my word for it, or better you drive over here and look under my sofa or mattress to see if I'm hiding anything. SGS is not genre specific, but if you have an appreciation for what I've offered thus far, that will be a big advantage, but I warn you, I may toss in a curve ball now and again. So for about 50 weeks this year, I'll be posting two installments. See? All you need is a computer and a basic working knowledge of first grade math.
First up is a picture disk single from one of the finest Midwestern quartets ever, Chi-town's Not Rebecca. You can play catch-up by going here. Even though you'll find a bevy of free MP3s, where it's really at is NR's two proper albums, Twin City Obituary and Rocketship to Canada, which I believe can still be purchased at Johann's Face Records site. At least I hope. Not Rebecca ushered a cozy Husker Du cum paleo-emo vibe onto the indie scene in the mid-90s, and unleashed a wellspring of masterful songs, a couple of which are represented here on their sole 45 release, some twelve years ago, courtesy of Thick Records. And "thick" this little slab of wax is, even for a picture disk. Enjoy (or not)


A. Three Feet Thick
B. Side You