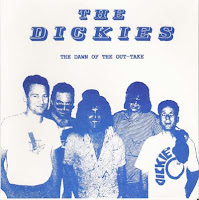 It's always the Buzzcocks, Descendents, Hüsker Dü, and other likeminded small-of-fame pop-punkers that typically get pegged as "influencers." Shouldn't LA's long-running Dickies be among that coveted contingent too? Anyway...


I mailordered this bootleg slab of clear yellow wax many years ago, assuming that it would contain demos or outtakes from the Dickie's wonderful, and in my opinion landmark sophomore LP, Dawn of the Dickies from 1979, but alas, it wasn't to be. Instead, I was graced with demo versions of "Cross-Eyed Tammy" and "Monkey See, Monkey Do," two tracks that eventually wound up on the Dickies fourth album, '89s Second Coming. Not a bad purchase, save for the throwaway b-side, which is apparently a soundcheck turned impromptu piss-take. Whatever. Enjoy (or not).
A1. Cross-Eyed Tammy
A2. Monkey See, Monkey Do
B1. Why Do You Do?

Dickies - one of the best!