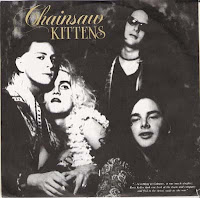 My introduction to one of the two greatest bands to ever emanate from Oklahoma (i'll let you figure out the other one) was via a college radio station broadcast in Albany, NY, on an evening runaway-from-home joyride sometime in the spring of 1991. The song in question was the LP version of this single, "Mother (of the Ancient Birth). Just as much now, as it was some 17 years ago, I'm still stunned by the tune's beckoning melody and power-chord thrust. The Chainsaw Kittens glam-rock, and to a lesser extent, cross-dressing tendencies were utterly lost on me, as I was in thrall with the music, not the cosmetics. In a fan letter I wrote to the Kittens, I opined that mouthpiece Tyson Meade recalled Morrissey. When Meade responded, he insisted that the Chainsaw Kittens thing had always been more Cheap Trick than anything else. By and large he was correct, but it took a few more years (and albums) to fully convince me.


As I mentioned above, the single version of "Mother" is a slightly different take than the one on their presently out-of-print debut album, Violent Religion, which also came out in 1990. The b-side, "Death-Sex Rattletrap" can only be heard here...and for better or worse, it'll probably stay that way.

A. Mother (of the Ancient Birth)
B. Death-Sex Rattletrap

because I saw that you have posted blurbs about Chainsaw Kittens and Defenestration before, and because I love everything Tyson Meade, I thought you might get a kick out of Meade having recently recorded a song with members of Flaming Lips and Other Lives - http://guestroomrecords.bandcamp.com/

The project is called Winter Boys. Meade is also recording a new solo album in China with Chinese musicians.

can you please re-up this one to? =) thank you so much

Could someone re upload Violent Religion? pleasee

Repost of the single please?