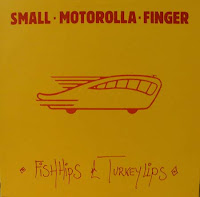 Here's an oldie, but goodie. The Fish Hips & Turkey Lips, was an ultra obscure UK vinyl only release, featuring three bands from the North Carolina indie-rawk circuit, circa 1993, or thereabouts. Distribution was assumedly scare stateside, but I bought this at a Small/Archers of Loaf concert either in '93 or '94, a point in time when the world was damn near-perfect. Don't think so? That's ok, you're still wrong. Here's a primer on the three participants:


Small (who later changed their name to Small 23, then absurdly back to Small again) were the best Chapel Hill, NC export second only to Superchunk. Small, as it so happened, boasted Superchunk expatriate Chuck Garrison, as a drummer, and in their earliest lineup, Eric Bachman of Archers of Loaf. Moreover, Small's real asset was a bevy of deftly crafted, melody-rich pop punk tunes that spanned three albums (I'd recommend True Zero Hook for starters) and a load of eps and singles.


Very little is known/written/spoken about Finger. A good fit for this compilation, Finger were the most "regional" of the three acts here. This is not to imply that they exude a heavy southern drawl, rather their aesthetic is a little "down home" so to speak. Finger produced about a half-dozen singles, and in 1992, issued their one and only album on Skyclad Records.


Motorolla were unsurprisingly, um, "urged" to change their moniker to the less infringing Motocaster almost immediately after Fish Hips hit the racks. Their rough-around-the-edges three chord rawk, was just swampy enough to lure in fans of Nirvana and the like, but despite a deal with Interscope that yielded their lone lp, Stay Loaded...bupkis.

Hey, this might be kind of shitty...but could you possibly up 'To trigger a synapse' again? I came across it a couple days ago and I neeeed it so bad. :)

The drummer for Finger is now in Snatches Of Pink.

thanks a lot Todd

WONDERFUL! You so narrowly beat me to posting this. One of my fave records. That first Small track...really wonderful. Easily one of N.C.'s greatest-ever bands. You're doing an amazing job, here. Keep it going. Primo choice!

John Howie, leader of the Two-Dollar Pistols and drummer for Snatches of Pink, was one of the co-leaders of Finger. Another was guitarist Brad Rice, who did time in the Accelerators, the Backsliders, Whiskeytown, Son Volt, the backing bands of Ryan Adams and Tift Merritt and currently plays guitar for Keith Urban. He also has a new band called the Lower Companions in Austin, Texas, that will definitely appeal to Finger fans.

Wow, I thought I had all of Motocaster/Motorolla's records. Thanks for posting this, I linked to it. . .

Thanks for the Small reups. Would you update this link as well sometime please? I'm especially eager to hear that 'Billy Spear Vs Jimi Hendrix' track since all of the other Small numbers off this comp seem to be featured in your other post... Small rules! Cheers.

I think the 2 instrumentals Drags The Surf and Surfs The Drags may be Motorola - Certainly the first one is very similar to The Buddha.

Great LP overall, many thanks for this.