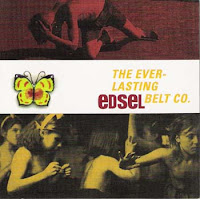 For anyone on here that pours through bargain CD bins, it's a safe bet that an Edsel disk pops up in at least one out of three. Yet you rarely see this Edsel CD gathering dust, and for damn good reason.


The timing and location couldn't have been more favorable for this quartet - Washington D.C., early-mid '90s -a period when beltway indie combos sprouted almost as fruitfully as the cherry blossom trees that line the capital mall itself. Edsel seemingly failed to ingratiate themselves among the more pop-oriented local combos of their day like Velocity Girl, Unrest, and Tsunami. The Dischord Records "punk" contingent made for a slightly more adaptable fit, but Edsel fell short of becoming homies with Fugazi and Shudder to Think. The band's affiliation with such a small label, the long departed Grass Records, didn't work wonders in increasing Edsel's notoriety, but it at least gave them a chance to churn out the best record of their career, The Everlasting Belt Co.


Where should I begin with this one? Let's start with warm. Tenaciously rhythmic. Clangy guitar runs. Dense arrangements. All cobbled together in a hazy, mid-fi gauze that touched on the post-hardcore aesthetic of hometown contemporaries Jawbox, with an eye fixed on the indie-rock innovations of Archers of Loaf, Pavement, and the like. The swarmy, tremelo-bent, "Penaluma," which originally appeared on a split single with Jawbox, was what originally lured me in, but amazingly, it was only the tip of the iceberg. Quite bluntly, this album's the shit. Two follow-ups, inferior ones at that, succeeded Everlasting, and for better or worse (mostly worse) those are the ones I referred to as traffic plugs in the used section of your favorite store. Edsel's debut album, Strange Loop, is however worthy of your attention.
01. Pell Confirms
02. Checking
03. Shaster!
04. Buckle
05. Oh Bliss, Oh Well
06. Proud City
07. Our Drunken Friend
08. The Good Celeste
09. Penaluna
10. Pigeon-Hearted
11. Stane
12. Whistle Down
13. Horn & Feather
14. Bone Tender
15. Narrow
16. 19:00 Hours at the Apollo
17. Fin
18. unlisted track

This title has been reissued.
Posted by spavid at 7:30 PM

while i dig everlasting and edsel in general, i would have to disagree with this being the best. i think techniques is solid through and through with portwood finish being an excellent song. thankfully was able to see them a couple of times in that time frame and before the picture disc 7" came out, but unfortunately never got the last bit of stuff they put out. thanks for posting excellent stuff though. rockon

hey man thanks for the props. glad you liked our record. its nice to feel appreciated 15 years later.

by the way, what's with the rapidshare link thing anyway? do you just post other people's records for free download figuring they are out of print so no harm done? i'm glad anyone cares enough to waste webspace on us, and i'm certainly sure that you are doing more to promote the memory of my old band than i am at this point. i am curious though about one thing. if we could manage to get our records reissued on itunes, would you post a link to that rather than just putting up the whole cd for anyone to download for free?
feel free to email me back directly if you want on this topic by the way. i know nothing about your site and just came by it randomly. seems pretty cool to me.
by the way, sohrab, our singer, has a new band with rick from hot snakes and drive like jehu called obits. and i am in a band called paramount styles with scott mcloud of girls against boys.
rock on!
geoff sanoff

remind me to NEVER listen to obit or paramount styles (and i think scott mccloud cando no wrong) due to the tool above.

geez, i'm sorry if i came off as an asshole. i'm happy having this record available for anyone who has any interest. please enjoy it and don't hate me for wishing that it could help me pay some bills 15 years after the fact.

way to be a dick to the artist, apoxonbothyourhouses. i hope he stiffs you for a tip when you serve him pancakes at IHOP.

geoff -- you'll find that there are, unfortunately, too many people like apoxonbothyourhouses all over the internet. But most people, like the owner of this blog, are more than happy to pay when that option is available.

I know that there are many albums that I've downloaded from blogs like this that I later re-download from eMusic or AmazonMP3 once they become available(I don't use iTunes) because I want to make sure that the artist gets money. I also buy from artist websites, etc. But until I've heard the music, I'm not going to buy anything.

i know that it's easy for me to say when it's not my work, but honestly, think of blogs like this as being like radio that is putting your music out there for potential future sales.

Thank you for this post. I also love "Techniques of Speed Hypnosis," and "Detroit Folly" has some wicked jams on it such as "Draw Down The Moon."
Awesome band.

Actually Edsel were very much "homies" with the likes of Jawbox, Shudder & Fugazi. Edsel Started Desoto with their first 7", Nick P went on to be Shudder's and then Fugazi's sound man for a number of years. That and we're all friends on Facebook. So no, not actual label mates but mates for sure.

Edsel's "The Everlasting Belt Co." and "Detroit Folly" have been remastered and will be digitally reissued by Comedy Minus One in September 2011.

Can I ask you to take down this link?

Jon Solomon
Comedy Minus One