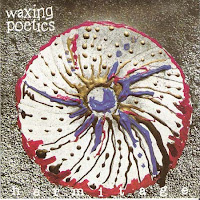 The Norfolk, VA based Waxing Poetics were yet another Mitch Easter production from the '80s that fell by the wayside. In fact, on this particular album, REM's Mike Mills assisted Mr. Easter on Hermitage, which also happens to be the Poetics debut. And for a debut, it's pretty decent, but not what you would deem revelatory. Playing resplendent, collegiate indie-rock, Waxing Poetics fell into the same realm as Guadalcanal Diary and The Connells. Some of Hermitage's more fetching moments, like "If You Knew Sushi," and "Distinction," place a particular emphasis on rhythm - a faculty many of their contemporaries were seemingly averse to.


Waxing Poetics went onto to records two more LPs, 1988's Manakin Moon (which featured an upbeat remake of Brian Eno's "Needles in the Camel's Eye") and Bed Time Story in '90. Some of their CDs fetch a decent amount of money on Ebay, if that means anything to you...

Update: Hermitage is now available through Amazon Downloads and iTunes.
Posted by spavid at 6:39 PM

Oh man, thanks for posting this record. I used to go see them at the boathouse in high school. I don't mean to sound greedy, but do you happen to have Manakin Moon?

I think I have Manakin in MP3 format. If the quality is satisfactory, I'll try to get it up in the near future.

All I can say is..."wow" ...thanks!! been trying to get this for years. Anyone who needs "Manakin Moon" or "Bedtime Story" please contact me......Oh...BTW, in one of my hardup broke moments, I sold my cd of Bedtime Story to none other than Dave Middleton on Ebay...had a nice correspondence with him.

sounds great! thanks much!

thanks for posting this--i miss this band