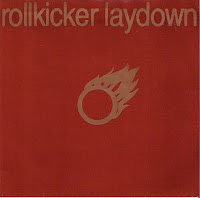 While we're on the subject of Geoff Turner (see Senator Flux post below), The Rollkicker Laydown 7" single makes for a perfect segue into edition #9 of Singles Going Single. If you're a fan of Washington D.C. post-hardcore rock, you might agree that Rollkicker Laydown's one and only record, is one of the greatest one-off singles ever. Music journalist Andy Kellman capsulizes the essence of this 7" classic better than I ever could:


Rollkicker Laydown was a post-hardcore version of the Traveling Wilburys. Well, maybe not quite, but the short-lived group did feature former members of Government Issue, Gray Matter, and Wool. Guitarist Tom Lyle (the Jeff Lynne of the group?), bassist/vocalist J. Robbins (then of Jawbox), drummer Peter Moffett, and background vocalist Geoff Turner met up with post-punk producer extraordinaire Iain Burgess (Effigies, Big Black) to record 1993's No Voices in the Wire single for DeSoto, the label run by Robbins' Jawbox mates Kim Coletta and Bill Barbot. Both songs on the single matched the quality of any given moment of the members' more serious prior engagements. ~ Andy Kellman, All Music Guide


What Andy fails to mention is that for all intents and purposes, both songs, "No Voices in the Wire" and "Cut," are stylistically slanted to Jawbox, not to any of the other participants aforementioned engagements. Even so, the "A" side, "No Voices..." is actually more immediate and engaging than anything Jawbox recorded up to that point. Right from the get go, Lyle's slicing, melodic power chords, are soon accompanied by Robbin's most devastating vocal hook to date, making for the three most visceral minutes you could ever hope to be within earshot of. The flip-side, "Cut," is culled from the same piece of fabric, albeit not as vicious and breakneck.
A. No Voices in the Wire
B. Cut
http://netkups.com/?d=645b99f611c51
Posted by spavid at 4:09 PM

Awesome to see this posted (though it's available from DeSoto via iTunes now) but I'm surprised you'd mention this 7" without talking about Burning Airlines, since 2/3 of the Rollkicker lineup went into that band and the songs are slanted to them even more than to Jawbox. BA even played 'No Voices' live quite a few times. There's a semi-legit live 7" from BA with a good, faster version of 'No Voices' on it.