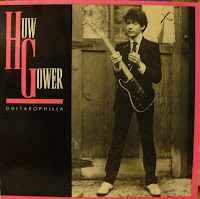 Mr. Huw Gower was the guitar slinger for a little known power-pop act from the late 70s/early 80 called The Records. Gower led his talents to the Records on their colossally influential, genre-defining debut, Shades in Bed (aka The Records in the States) including the classic single "Starry Eyes." No home should be without one.


Gower made his departure from the Records around 1980, just prior to their sophomore album, Crashes. His debut solo offering, the four-cut Guitarophilia ep was released in 1984, but his, debut album, Ile de France didn't materialize for a full sixteen years. Now that's what I call a coffee break!


Guitarophilia kicks the proceedings off with the sprite "She's Still a Mystery," which would have found it's rightful place on the first Records album. Gower temporarily relinquishes his singing duties to Regina Now on "Love on Demand," and although it marrs the continuity of the record, the ep recovers on side deux with the mid-tempo rocker, "Calling Out the Heretics." A respectable cover of Eddie & The Hot Rods' pub-rock standard, "Do Anything You Wanna Do," closes out this ep on a high note, and furthermore, bolsters Gower's credibility.


As mentioned above, Gower released his debut full-length in 2000, and followed that up with In Pursuit Of Excellence in 2003, an album that revived his power-pop roots.

Well, considering that Starry Eyes is a BLATANT rip-off Do Any Thing You Wanna Do it seems only fair that his cover should be respectable!

I have this somewhere. Now I don't have to dig it out... unless I sold it to you and forgot!!!

I bought it at HOTH for 25 cents about seven or eight years ago. You must not have wanted to keep it that badly, huh?

Yeah, it was probably mine at one point. Oh well, at least I have it in ones and zeros now!

awesome post!! you really have great blogsite!!!super thanks bro!!

Huw Gower has a plethora of old, revamped and new songs on his label TCBHeaven. Listen to the cd you will get the TCBheaven bit.
Unfortunately, "Guitarophilis" is out of print. Gower couldn't fathom beforehand what a big seller it would be. He'd love to re-cut it from a viinyl ep to cd, adding and deleting various bits.
I will point this out to him...and if you gotta buck to play with and fancy the indie market, do let him know. Cheers, Annie

Vis a Vis le chanteuse Regina Now, she certainly did 'mar' (which is kind) the sound of "Guitarophilia". Rolling Stone referred to my vocals as 'lifeless murmurings'.
But what could Huw do? Marianne Faithfull was supposed to cut that track but didn't show up for the session. Figuring "Love On Demand" could only have hit potential with a great vocalist, we decided, OK, publishing demo. Since, I was hanging around, I did the business, triple tracked with Huw singing in the background. I was a bloody wreck.

No one ever dreamed that 'Guitarophilia' would have such critical success - top 5 in Playboy (my uncle called me to tell me that - embarrassing I was a young girl), NY Times Best 1984 twice and a host of others. When Huw brought it to an attorney who chased the market, she loved it but felt she couldn't shop because it had already been released on his own label X-Disque. (as in ex-records)

So a genuine thank you for the validation that I did the right thing not letting working with Huw go to my head. When I didn't feel crushed by RS's comment about me, I realised this was not something I wanted to do or I just didn't give a damn but I never looked back.

I must say in retrospect, that "Love on Demand" was very forward looking about what lay ahead in the romance department.

Huw never considered shopping it first. It's a shame but it's hard to know the right thing to do especially in 1984 when you're doing your first indie. FYI, It was financed by Jim Bradt,who worked for Blue Sky on the David Johansen Band account and a fan of Huw's, to whom he is most grateful.
Regina (p.s.) You can still contact Huw at www.HuwGower.com.

One other note - while it was a long tea break for Huw between independent recordings, he was quite busy studying folk and classical music; getting his certification as an Carl Orff Schulwerk instructor, being on the road with David Johansen, Graham Parker and many, many one-off gigs, recording sessions, in addition to bands with Steve Holley and Graham Maybe that they put a lot of work into but fell apart because Steve and Graham had to tour. Recording "Darlin'" as a Records tribute to Brian Wilson with TR being on both sides of the Atlantic. He was hardly inactive and he began artist-in-residence programs all over NYC for kids' whose schools had no music program. I am certain he has a lot of songs in him but let's face it, it takes a lot of money and hope to get your indie record to fly. Robert Palmer was right when he said there is no justice in the music business if Gower's next record isn't on a major label. Ta ta for now, Regina

Hi Evi
No one including authors Will Birch and Huw Gower denies Do Anything You Want To Do was a rip off for Starry Eyes. Huw is a friend Grahame Douglas and he had no problem with it - even tho we'd cjhanged some of the lyrics (Nor about 'Starry Eyes'.)
Most songs are inspired by other songs. However the guitar parts, intro,, bridge and outro were written by Huw, hence the change in lyrics and sound vis vis
'Starry Eyes'. If you know it's a rip off i suspect you go to The Records site where Biirch admits your comment about the rip off - only an astute musician or web surfer would norice. Why repeat that? 'Guitarophilia has beem sold on eby for $75 several rimes. All I did was respond with a bio.

I love this blog.

I had the good fortune of not only seeing The Records play in the wilds of Long Island (the back door of the club opened up onto highway 27A), but opening for them that night was the dB's. I believe this was in '79-'80, sorry my memory is fuzzy on the dates.

It was not too long before I moved from NY to Raleigh, NC.

It was a great evening.

Thanks for reupping this. I love The Records!