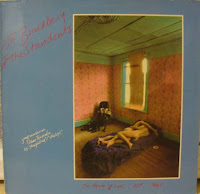 First off, let me start off explaining that there is virtually no information regarding Jo Broadbery anywhere online. Despite garnering a short-lived stint with Virgin Records via his previous project, Local Operator, in the late '70s, the man seemingly dropped off the face of the map - either that or "Jo Broadbery" was simply a vanity moniker. If anyone knows anything regrading this chap's whereabouts, or if the man himself is perusing these pages, don't be a stranger.


The innovatively titled, House of Love is the second and final album credited to Jo Broadbery and the Standouts. A self-titled debut album was issued two years prior, but the circumstances surrounding that release are confusing. In the late '70s, Broadbery was the frontman of an equally obscure outfit dubbed Local Operator. Arguably, you could refer to Operator's shtick as power-pop, but they bore a considerable mod/ska-inflection that was hard to go unnoticed.


Two relatively easy to find singles were released on Virgin (potentially a subject for a future post) under the Local Operator name. Following up those 45s was an extremely rare and unspeakably scarce album, Pushing Out the Poets. We're talking serious Ebay potential folks, but I digress. Issued only in Europe, my guess is that the project stiffed. Unbeknownst to even a lot of Broadbery fans, that Local Operator album was reissued song-for-song with entirely different art under the name of Jo Broadbery & the Standouts, in 1980. In fact, PVAc to 44.1 kHz blog has posted that fine album right here if you want to investigate for yourself. The recordings and mixes between the Local Operator and Jo Broadbery versions of the record were to my knowledge identical, but I cannot confirm that. There has been no explanation for the album's re-release under Broadbery's name, but marketability might be a safe estimate. At any rate, Broadbery and/or Local Operator were virtual unknowns in either incarnation, and the album was never issued on CD.


That brings us to the second Jo Broadbery & the Standouts full-length, The House of Love. It was released on the German Blow Up Records label in 1982, presumably sold exclusively in Europe, and even more obscure than the debut. While the first album flirted with the last vestiges of the waning British punk movement, Broadbery and Co. were by and large aiming for the pop charts with this follow-up, but without pandering wholesale to the new-wave trend-du jour. Admittedly, I am partial to the second side over the first, but as a whole it's not as strong as the debut. Nevertheless, even though it takes some getting used to, I thought I would post The House of Love, for the few established Jo Broadbery fans out there. Lord knows there's ain't many of us!
01. The House of Love
02. Back in Anger
03. Heaven's Boys
04. Snakebite
05. Sharon Was
06. What Kind of Joke is That?
07. One Heart
08. The Cage
https://www28.zippyshare.com/v/PzQS4yEN/file.html
Posted by spavid at 8:13 PM

In Canada that Jo Broadbery album was a cut-out bin regular - so finding that Local Operator LP confused me at first.

I'm surprised to find out they had another album. 1982 was bad year for music so I won't get my hopes up.

You remain lined at:

Hi my name is philip broadbery, Joe was my uncle. Unfortunately he died in the early 80's. My family and I had the same problems finding his records but eventually we did on an online record shop. Keep searching and you will find them.

I really appreciate your comments. Never thought any of his relatives would find this. Very sorry to hear he passed so young. If you have any other info you can provide, view my profile for my email address and drop me a line. Thanks!

Dear Wilfully Obscure
I found your blog by chance and it comes as a major surprise that there is such an interest in my late brother Joe and his recordings. He sadly died in April 1987
I have all his recordings and will scan and send images to you I will also try and assemble as much info about his respective bands and projects.
Local Operator was originally formed in Copenhagen Denmark in the late 70's I have early recordings on tape somewhere and will try and retrieve for you.
Best regards
Kevin Broadbery

Hi there...I have a copy of the Canadian issue of the Jo Broadbery and the Standouts LP...it's quite good. I was thinking he may have been Canadian (being an Attic Records release), and was going to post him on www.itcamefromcanada.com.

I'm sorry to hear he passed away so young...seems he had a lot of talent.

Thanks for this!
I got the first album a while ago and loved it. Didn't even know there was a second. I saw his brother's comment, did you ever wind up getting anything from him that you could share on the blog?

Hi, my name is Bruno Blum. I am a musician and I used to live near Joe's place in 1980-1982. He lived in a basement flat on Ashburn Place, London, right behind the Gloucester Road underground station, a couple of doors off the Cromwell Road or so.
I stayed with rock group The Electric Chairs (of Wayne County & the Electric Chairs fame), who had a squat at 8, Queensgate Place near there. The Electric Chairs had a former The Police member, Corsican guy named Henry Padovani on guitar and, after Wayne left in late 1979, he became their vocalist for a while. Padovani had arranged for me to move in his room after he got married and moved to Vauxhall in early 1980. I used to see Joe on the streets sometimes. Henry Padovani knew Joe pretty well and took me around his place on Ashburn Place a couple of times. We called him Local Joe because of his records as the singer of Local Operator. Joe was a handsome, slim, curly hair, black-suited rock and roller who didn't shave everyday, talked and laughed a lot. I did not feel comfortable with him. He did not seem to be too content. I suspect he and Henry perhaps had a coke connection together, or perhaps smack, I don't know. There sure was a lot of heroin around in our Queensgate Place squat at the time and I think I remember Henry telling me later that Joe had died of a drug-related problem. Joe seemed to be all right then, but he was obviously struggling to get his music together and things weren't ever easy at all. Getting a record out was always difficult and getting some gigs in a highly competitive city like London was pretty hard. He was one of my many friends who died young at the time. I still have his two first Local Operator singles.

I'm just seeing your comments now Bruno. Thanks for your input. Yes, I know he passed away. I appreciate your insight. Even though you didn't hit it off with him, I'd like to have met him myself.

I ordered some LP's from Discogs a while back and the Jo Broadberry LP was just included in the package as a freebie!!!! I'd never heard of him before and was going to put the LP in the recycling, BUT I decided to play if and BOY was I surprised at how good it is! It's a keeper.

Hi, I saw your post about Jo Broadberry. I played with Jo many times, in fact we left Ireland together and moved to london to "make it" in the music business. If you'd like any more information please feel free to contact me, Frankie

Hi Frankie. Nice to hear from you. In my user profile on here you'll find my email address. I have a few questions regarding Jo, but not an overwhelming amount. Much appreciated.