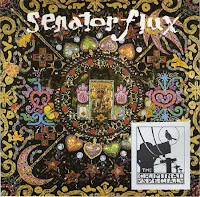 As if it wasn't enough to helm two influential D.C. hardcore bands (Gray Matter and the poppier Three) during the mid-80s, Jeff (alternately spelled Geoff) Turner upped the ante another notch by the turn of the decade with the tragically overlooked Senator Flux. A lost, but superb left-of-the-dial contender, Senator Flux's unique spin on collegiate indie-pop was a measured one at that. Even at their most neurotic, power chord rave-ups and blistering punk salvos were nowhere to be found. All the better, because the band's lucid context provides an ideal backdrop for Turner's half-spoken/sung acuemen, wherein he often rambles and waxes philosophical in the verses, only to recover with a sublimely melodic chorus that more than rewards your patience. Brass and woodwind's mildly punctuate some of Flux's material to sweet effect. 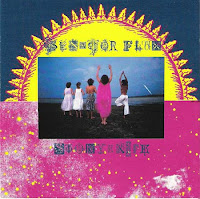 The two albums this post concerns were staples for me in my late high school years. I was informed of The Criminal Special through a music video for "Grey Eyed Athena." To me, this album points to where The Connells and Guadalcanal Diary should have been heading at the time, but that's more of a personal observation, not so much a critique. A thoughtful rendition of the George Harrison-penned "It's All Too Much," meshes perfectly with the original compositions. The following LP, Storyknife from 1991, was more advanced, both in harmony and Turner's pensive prose, the likes of which haven't been heard since. I can't emphasize enough how unique Senator Flux were. Definitely not power pop, but atypical and mesmerising pop all the same.


These two albums were preceded by the less accomplished Shotgun For Cosmo and Spectacles, Testicles, Wallet, and Watch, which are still worth investigating, depending to what extent you appreciate the ones discussed herein.

You forgot another littler band he was in before those two, Minor Threat. Thanks for the up, I have only heard the first album.

I loved (love) Senator Flux. I had all releases on vinyl back in the day, but "lost" them since (long story); so thanks for posting this!
I agree these 2 later albums were much better than the first two. Nevertheless, any chance that you can post those, too?

my dad was in that band. it was jeff nelson who was in minor threat, not geoff turner.

and geoff didn't write and sing the bulk of their work. that was david levine. although i always favored geoff's songs.

Do you have complete lyrics for grey-eyed athena, by any chance? Thanks.

In the summer of 1998, I went to D.C. with some fellow punks (we lived in NC) to see the Warped Tour in RFK stadium. We stayed with a friend of mine who lived there, and he took us to one of his favorite record stores (can't remember which).

I was a big fan of Gray Matter, and my friend pointed Storyknife out to me, which was in a 50-cent bin. It took me a few listens to get it, but it ended up one of my all-time favorites. Universal Solvent I think will remain in my top-10 song list forever.

Despite that, I believe the best Senator Flux record is in fact Spectacles, Testicles, Wallet and Watch.

Too bad nobody ever heard this band.

I've had these two discs for years. Thought I was the only one who had them, too. Time to dig 'em out! Keep up the good work!

there's a facebook fan site now. has a lot of lyrics and songs

Great band, I actually liked the first two albums a lot better. They seemed to enjoy themselves a lot more on those two. I really played those records a lot.

Greetings from Ireland. My god - senator flux, Guadalcanal Diary and The Connells in a single sentence? What's the chances of that? What next? Possum Dixon, Big Car and Blue Rodeo? Great post - have Senator Flux's Storyknife on my turntable right now. Brilliant. A bit like Australia's The Church in parts. Magic!

Big BIG ups for the post. Such sweet nostalgia. Saw them in Guelph Ontario 1991ish. Such a positive collaboration!

I'd love a re-up if possible?

The links to the album downloads are bringing up a 403 forbidden page... Anyone know where to download Criminal Special?

Another request for a re-up please!