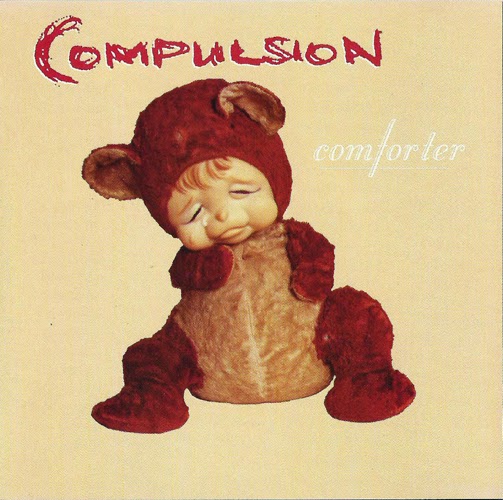 Like the Pooh Sticks whom I spoke of a couple days ago, John Peel must have had a field day with these folks as well.  More "Brit" than "pop" Compulsion nonetheless possessed some poignant melodic structures amidst all their rigid musculature.  Therapy? by way of Sugar?  China Drum sailing their proverbial ship past Catherine Wheel in the night?  Their debut, Comforter (and for that matter subsequent releases) wasn't particularly exotic, yet despite potential grunge marketability in the States, this punky nugget came, went, and landed in a seemingly infinite number of bargain bins.  A real travesty considering the comparative depth of their tunes to pretty much anything occupying the UK charts during that era.  Compulsion's overarching conscience was more societal than political, delving into such arenas as consumer culture, depression, and other untidy themes sans any preachy or pious slant.  And big fat hooks propelling that ethos to boot - "Eating," "Why Do We Care?" and "Mall Monarchy," to name just three. The latter of these is a fictitious, postmortem ode to the man who designed the first shopping mall.  Ironically the real individual who was responsible for the wide-scale propagation of indoor shopping malls, Alfred Taubman died just last month.

In addition to the already generous fifteen track Comforter, certain European versions were paired with a bonus disk of eleven songs composed of two early Compuslion eps, a self-titled 1992 effort, and Casserole which followed a year later.  To my knowledge these were initially only available on vinyl.  Perhaps some Compulsion b-sides to follow.

Have played this album since it came out. It's such a jewel in my collection. Saw them a few times in 1994 and had the pleasure of getting thrown out of Hogs and Heifers with JosephMary. Good Times.

The band also features a young "Jacknife" Lee, super-producer to the stars!

Thanks for commenting folks. Was there ever a reunion for these guys?

Don't think there was any reunion. Saw them at Limelight. They killed. Their 2nd album has some moments as well.

Super blog and and good work for the comfort and i really like it.
light down comforter