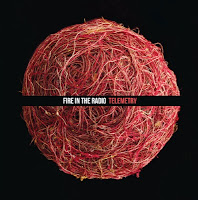 Way back in 2008 I introduced some of you to the band Fire in the Radio, much in the same manner I normally feature other esoteric or outright forgotten artists.  In the case of this presumably defunct Pennsylvania bunch, I didn't have much to go on other than the contents of their 2000 Red Static Action CD, which struck me as an astute merger of mainstream-ish emo grazing at the heels of my much endeared Tar Heels, Superchunk.  In that initial write-up, I lamented the fact that there was no follow-up to Red Static.  Unbelievable as it may sound that all changes this very week when FitR submit their sophomore record, a decade and a half later I might add.  Word has it that certain murmurs in the music blogosphere may have encouraged this quartet to reminisce about days of yore, leading to the reconstruction of Fire in the Radio as a band, and thus Telemetry itself.  Toss in a little crowd-sourcing action and more notably, a current tour and you've got a full blown reunion on your hands...but we won't take any of the credit for that.

The reddish rubber band "planet" adorning Telemetry's album jacket isn't exactly a harbinger of what awaits the listener.  Instead of the loose, pull-a-band-and-it-all-unravels premise it portends, that makeshift rubber ball actually runs contrary to Fire's eminently powerful solidity.  Almost as if their Y2K-era debut never happened, Telemetry is exponentially more decisive and bolder, not to mention devastatingly tuneful as-all-get-out on "Best Shot" and "Ghost to Haunt You."  Song for song Fire in the Radio harness the kind of lean, mean incisiveness to set transistors ablaze as their metaphorical namesake implies.  Informed by Alkaline Trio, Jimmy Eat World, and too a lesser extent a bevy of crunchy indie rawkers like the Doughboys and Big Drill Car, FitR are too crafty for the Warped Tour midway, yet wouldn't sound a hair out of place straddling the stage at your local gin mill.  To a handful of us hanger-oners, Telemetry is tantamount to a quantum-leap comeback, but to the world at large this disk serves as a galvanizing introduction.

Purchase Telemetry straight from Wednesday Records or Bandcamp or Amazon or iTunes. You can check out one Telemetry selection below, along with a demo from their Soundcloud page.