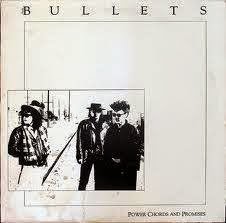 Cosmetically there isn't much to distinguish The Bullets from the brunt of your '80s run-of-the-mill, runamucks - teased hair, sunglasses and even a little spaghetti western garb.  Ditto for seemingly pedestrian and hackneyed song titles like "Walk On" and "Fact or Fiction," right?   Surprise.  This quartet from Glendale, CA boasted a sonically inviting post-punk aptitude to mesh with those MTV hairdos with most of the credit going to axe-wrangler Scott Grant, whose galloping arpeggios sting and stun in the best possible way.  The Bullets distill elements from an array of seemingly divergent sources: Big Country, Cocteau Twins, The Rhythm Corps and even Vomit Launch (though the latter of those is likely a sheer coincidence).   Microphone fiend Joe Rotger's high timbre is equally as notable as Grant's echoing fretboard runs, and collectively the Bullets are a profoundly enthusiastic lot, pounding out driving, frenetic missives like "That Certain Glow" and the aforementioned "Fact or Fiction."  Power Chords... rapid-fire salvos sound a tad hasty, and at worst sloppy, but therein lies the record's charm.  Truly a feast for the ears.

Thanks for all these great posts. There's something intriguing every week. I'm currently loving this Bullets LP!

Thanks for the review. It's taken me five years to read it, but I'm the drummer on this album and had a lot of fun making it. Our guitarist and songwriter Scott Grant, just sent me an email reminding me that we played the Whiskey 34 years ago tonight. Time flies when you're having fun.