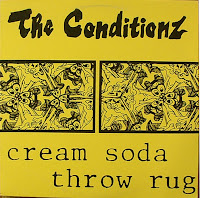 I recently had a very enthusiastic request for some tunes by The Conditionz, a Riverside, CA foursome I know almost nothing about, but I did happen to snag a used copy of this disk from a used bin at a price I simply couldn't refuse: $1.00.  Yep, I'm a sucker, but in all sincerity Cream Soda Throw Rug (which appears to be the band's second long-player) is reasonably good, albeit not thoroughly recommendable.  The Conditionz spike their ramshackle punk n' roll with intermittent surf, blues and twang seasoning.  Leadman Bob Nye coincidentally recalls Michael Monroe on occasion, but there's little glammy decadence to be had on Cream Soda...  Sorta in the same league as early Soul Asylum, or perhaps a hipper-than-average bar band, if any such animal even exists.  Typically, it's the most serious moment on here, "Flt. 19" that rings my bell.  BTW, the Conditionz reunited for a show in 2013.

It has been requested that I remove this link.
Posted by spavid at 6:09 PM

My man bless your soul, this is a blessing. Yesterday I saw Naked Soul The Seed ep on this blog. Is there anyway you could please re up that ?

Their first LP with the song In The Vouge is pretty great.

out of the darkness of a google search.....thanks for the review, have some more, and catch up a bit....enjoy!~

^link is to our google drive, the entire Primal Lunch discography exists within.

come find us on Facebook, join oour group, like Primal Lunch Records, so we can keep the light on.

so spavid, it appears a link to a file sharing site is possibly our content? tell me it ain't so, and we won't drop by, say hello to ya, face to face....

Sorry about this! The link is removed.

Love the review, and what you do, thanks spavid.

Would like to point out, the link to our discography, on Google drive, is there for you and whomever stumbles upon it, to listen and share to yer hearts content. Enjoy.