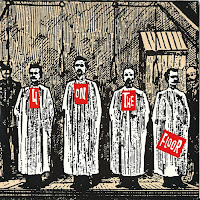 I remember being utterly stoked when this dropped in '93.  After all, it contained no less than three bands I had a huge vested interested in, and one (Dirt Fishermen) who I would learn to appreciate a little later.  Unfortunately for the Treepeople, they were hobbling around on their last leg by this time 4 on the Floor came around, with the recent departure of Doug Martsch who was already full steam ahead with Built to Spill.  That being said, "Boiled Bird," isn't far off the mark from the material on the band's then most recent LP, Just Kidding.  Another big draw was Seattle's distorto-pop virtuosos Gnome.  Their "Crush" held me over 'til their second album Fiberglass dropped later in the year.  And the shiniest jewel in this four-gem crown is none other than Alcohol Funnycar, who contribute an exclusive, riff-happy nugget of gold, "Push," a track that found it's way onto many a mix tape I churned out back in the day.  Like the Treepeople, the Dirt Fishermen had roots in Boise, ID, but were culling fish from completely different waters.  If you like their selection here, check out their Vena Cava full length from 1993.

Wow thanks for this! I haven't seen or heard it for about 20 years?

Any chance of a re-up on this one?