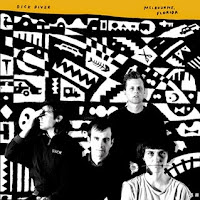 Gone are the days (as it would seem anyway) of paring down Australian acts to sheer triviality.  Unkempt roughnecks AC/DC, and Vegemite-chomping MTV flavors-of-the-minute Men at Work may have colorfully typified Oz's musical contributions in the past, but the truth is even back in the '70s and '80s the land down under wasn't hinged solely on gimmicks.  In fact, come the twenty-first century, most Australian acts are/were largely indistinguishable from their contemporaries inhabiting the west.  So where does Melbourne's Dick Diver factor in?

Nowhere screamingly obvious to be honest.  In fact it isn't easy to make generalizations about these fellows (and fell-ette Stephanie Hughes) though a good brunt of the text dedicated to them on other outlets make a big to-do about the quartet's jangly guitar tones (courtesy of McKay and Rupert Edwards).  True that, but sonically, Dick Diver's sweet, clangy chords don't dominate so much as embellish, most effectively on Melbourne, Florida's more extroverted numbers "Tearing the Posters Down" and "Waste the Alphabet."  That facet carries over more subtly onto "Leftovers," where trumpets and sax likewise filter their way into the mix.  Later in, D/D play it up casually and smooth on "Percentage Points," while the going gets more insular and intimate on the acoustic "Boomer Class."  It's apparent that all four participants here contribute to lead vocals, but frustratingly the sleeve notes don't specify who's fronting the mic from song to song.  What I can tell you is that whomever is getting face-time on "Beat Me Up" and "Competition" simply isn't in his natural element.  When all is said done, Melbourne, Florida (D/D's third album, btw) functions as a loose patchwork of styles and pastiches, more seamlessly stitched together in portions than others.  Dick Driver's modest and meager indie-pop tenor nonetheless manages to yield magnificence when all the right components congeal.

Melbourne, Florida is available from all the usual suspects: iTunes, Amazon, Bandcamp, Chapter Music and direct from Trouble in Mind.  A North American tour will ensue this July.
Posted by spavid at 1:05 PM

you mention that their influences aren't obvious, but the first time i heard DD i definitely got a "flying nun" vibe (especially the bats'girl/boy singing and the verlaines trumpets) and a little of the go-betweens. regardless, this is a terrific band for sure.