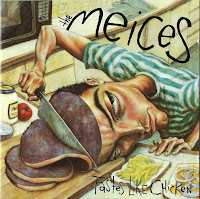 Lead-Meice Joe Reineke would probably tell you that The Meices third and final outing, Dirty Bird, was their premiere effort.  I'm partial to the preceding, Tastes Like Chicken, if only because nothing they put their name on before or since matched the thrashy exuberance of that record.  For the uninitiated, it's hard to deny San Fran's Meices didn't occupy a slot on the punk-pop continuum, yet you would have never mistaken this trio for Green Day, Blink 182, or for that matter the Descendents.

Instead, their indigenous formula hinged on Reineke's throaty howl (teetering ever so precariously on the border of a whine), a Jerry-rigged delivery system, and as far as TLC is concerned, some near-startling dynamics.  The proof is in a bevy of feral, ragin' slammers, including but not limited to "Lettuce is Far Out," "The Big Shitburger" (aka "Sister"), "Until the Weekend."  The key to ...Chicken's charm is producer Kurt Bloch's (yes, from the Fastbacks) acumen for the capturing the Meices raw, ferocious live sound in the studio, especially Reineke's guitar and Marc Turner's kinetic percussion.  Sonically, the warm analog hue that envelopes the proceedings is just as vital.  And if the uptempo numbers are at all grating on your eardrums, by album's end there are a pair of mellower, not to mention thoughtful respites in the form of "Hopin' For a Ride" and "Now."  I've dedicated entries to several other morsels in the Meices catalog, all of which you're welcome to check out here.  Finally, I'd be remiss if I failed to point out this record's bizarre album sleeve, that only a decade like the '90s could have induced.

Agreed! A really big thanks to both of you!

Thank you so much!!

Totally agree on the singer's voice style, lol, sounds like he's whining.
a good album (fav one: That Other Good One). 3/5