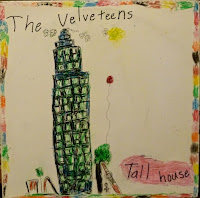 This genial (and quite frankly juvenile) album jacket ironically belies a record that’s more in league with goth rock old school than preschool.  The co-ed Velveteens ain't on no gloom trip, but there's a palpable noir edge to Tall House, that once again stands in almost absurd contrast to the sleeve depicted to your right.  The title track kicking this five-songer off is an icy and mightily effective slab of austere post-punk - so much so the remainder of the disk doesn't quite stand a chance.  The proceedings get downright groovin' on "Tired of the Beat," which vaguely rejiggers '80s Bowie.  The darker and potentially appealing "Flies" is undercut by slowing down the vocals in relationship to the rest of the ensemble, giving the effect that frontman Lawrence Clayton is in 33 rpm mode while the band is doing their thing at 45.  Hmmm.   BTW, my copy of this record was hand colored in crayon.  Amazing.

Thank you very much for this.

Uh, hi. Larry here from the actual band. Thanks for posting this. Here's my new outfit We Found a Lovebird. https://wefoundalovebird.bandcamp.com/

I see there's a new band out there with the same name. Anyway, I like to think that we were the premiere fabric band of the 80's in Vancouver. Ha!